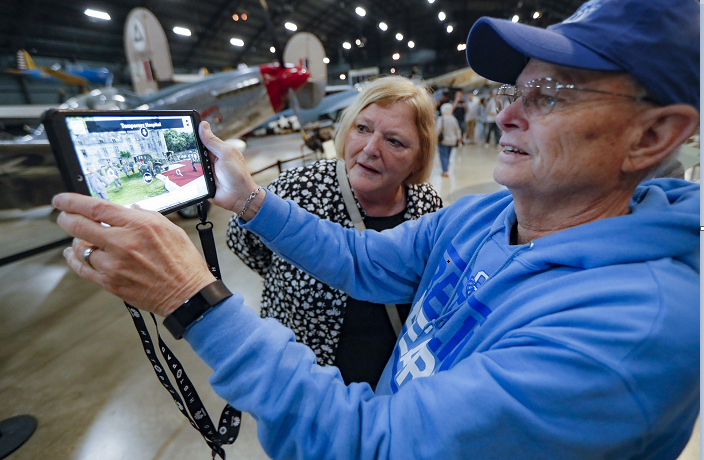 The French and the Americans are working together again on a D-Day project - this time to give museum visitors the opportunity to travel back in time and experience the milestone World War II invasion 75 years later.

From the viewpoints of a paratrooper snagged on a church steeple or a soldier firing a bazooka at a German tank, visitors at Ohio’s National Museum of the U.S. Air Force can soon be transported to Normandy, where the June 6, 1944, attack happened.

Using tablets called HistoPads, museumgoers will be able to move a slider to contrast current views of historic sites with re-creations of them in the past. They can tap on icons to see animation, as well as video footage, photos and maps from 1944.

The new way of learning about D-Day is set to launch Monday as part of the museum’s D-Day commemorations, which will also include paratroopers dropping from a vintage C-53D dubbed “D-Day Doll,” exhibits and movies.

The Ohio museum, near Dayton, will be the first in the U.S. to use the HistoPad, although there are talks of expanding around the country, according to Histovery, the French company that developed it.

The tablets are among new technology increasingly in use at museums and historic sites that offer virtual and augmented reality to help learning and understanding, such as in the “Heroes and Legends” exhibit at the Kennedy Space Center in Florida.

The D-Day exhibit was a natural place to start the U.S. rollout, also the first site outside of France, said company spokesman Bruno de Sa Moreira.

“It’s a very exciting adventure,” he said by telephone from Normandy. “We are basically telling our joint history, when the American soldiers fought for the liberty of France. We have a common past and a common duty to remember.”

HistoPads, introduced five years ago at a medieval castle, are used in 15 monuments and museums in France by more than 1 million visitors per year. Among the historic sites where they are available are the Popes’ Palace in Avignon and the Royal Fortress of Chinon .