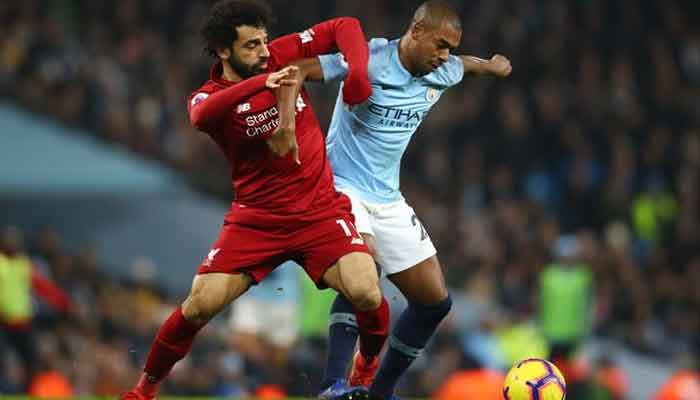 Manchester City and Liverpool's enthralling battle for the Premier League title will come to a climax on Sunday when City visit Brighton, while Wolves travel to Anfield.

Defending champions City have the upper hand as they lead by a point knowing they only have to match Liverpool's result to become the first side in a decade to retain the title.

Liverpool have not lifted the league since 1990, but could not have done much more to finally end that wait after posting a club record 94 points with one game to spare.

Incredibly the Reds could post the third highest points tally ever in the Premier League with victory against Wolves and still miss out.

"Both teams deserve the title. But it can be just one. The team that is going to lose can't have regrets because they have given everything," said City boss Pep Guardiola.

Statistically this is the greatest Premier League title race of all-time, but AFP Sports looks at what rivals it for drama from the history books.

Should City seal the title on Sunday it will be the club's fourth in eight years, a run that was started by Sergio Aguero's dramatic winner as they came from 2-1 down in injury time to beat Queens Park Rangers 3-2 on the day and Manchester United to the title on goal difference.

City had also seemed down and out just weeks before as defeat at Arsenal saw United open up an eight-point lead with six games to go.

However, Roberto Mancini's men won all six, including a 1-0 victory over United, while the Red Devils lost at Wigan and drew 4-4 at home to Everton to hand Aguero the chance to snatch it away.

The most memorable season in Manchester United's history could have turned out very differently but for a late season slip up by Arsenal at Leeds.

United, Arsenal and Chelsea battled for superiority throughout the season with Alex Ferguson's men failing to win any of the four games against their title rivals.

However, Jimmy Floyd Hasselbaink's winner at Elland Road to beat Arsenal in the penultimate game of the season meant United claimed the title on the final day with victory over Tottenham before also going on to lift the FA Cup and Champions League.

Prior to Aguero's winner in 2012, the most dramatic conclusion to a title race had no rival as Arsenal snatched the league from Liverpool's grasp in 1988/89.

The reason the top two were even facing off in the final game of the season was because the fixture was rescheduled after the horror that saw 96 Liverpool fans killed at Hillsborough during their FA Cup semi-final with Nottingham Forest.

However, on the field Liverpool had responded resolutely, winning seven of their next eight games to lift the FA Cup and move three points ahead of Arsenal before the end of season showdown.

The Gunners not only needed to win at fortress Anfield but do so by two clear goals.

And against the odds they did so as Michael Thomas sealed a 2-0 win in stoppage time.

Kevin Keegan's Newcastle were the Premier League's great entertainers and seemed destined to deliver the title to Tyneside as they amassed a 12-point lead by January.

However, as they collapsed, winning just twice in eight games between February and April, Ferguson's United charged, winning 13 of their last 15 games with Eric Cantona back from his eight-month ban for kicking a fan the previous season to the fore.

Newcastle's frustration was summed up in an explosive television interview given by Keegan in which snapped back at Ferguson's claims that other sides tried harder against Manchester United than Newcastle.

"I will love it if we beat them. Love it," said Keegan, but the tide had turned and United pulled away to win the title by four points.

Liverpool edged a battle for superiority on Merseyside in both the league and the FA Cup as Kenny Dalglish scored the winning goal in the title race in his first season as player-manager.

Everton led their local rivals by 12 points after victory at Anfield in late February, but Liverpool went on a storming run to win 11 and draw one of their last 12 games to claim the title by two points.