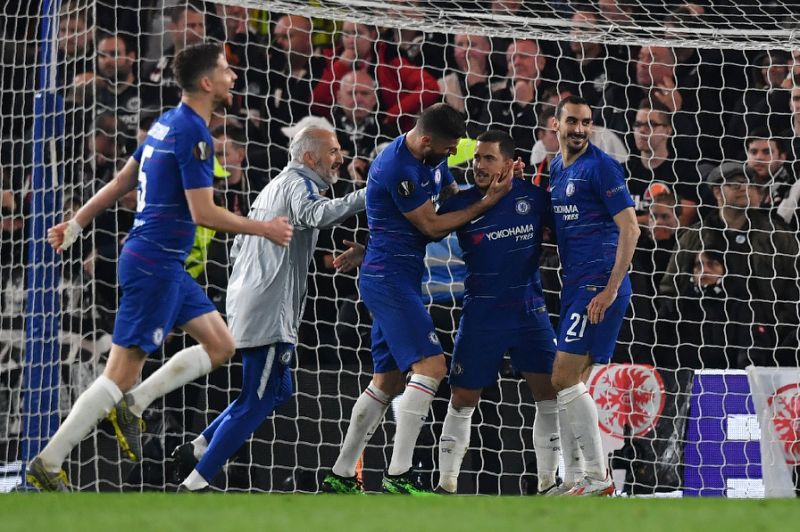 Kepa Arrizabalaga was Chelsea's hero as the Spanish goalkeeper sent his side to the Europa League final with two penalty saves in a dramatic 4-3 shoot-out win against Eintracht Frankfurt on Thursday.

Maurizio Sarri's side will face London rivals Arsenal in an all-Premier League final in Baku on May 29 as for the first time all four finalists in the Champions and Europa League come from England.

Chelsea took the lead in the semi-final second leg thanks to Ruben Loftus-Cheek's first half strike at Stamford Bridge.

But Luka Jovic equalised soon after the interval as a tense clash finished 1-1 after extra time and 2-2 on aggregate.

Cesar Azpilicueta's penalty was saved by Kevin Trapp in the shoot-out, but Kepa kept out Martin Hinteregger's effort and then turned away Goncalo Paciencia before Eden Hazard slotted home the decisive kick to spark wild celebrations.

It was a sweet moment of redemption for Kepa after he was widely criticised for his astonishing mutiny in the League Cup final against Manchester City when he refused to be substituted before the Blues lost on penalties.

Hazard also relished his crucial contribution in what could be his last kick at the Bridge amid rumours of a close-season move to Real Madrid.

"I am only thinking to win something for this club," said Hazard when asked if the final will be his last game for the club.

"If it is my last game I will try to do everything. In my mind I don't know yet."

Having already qualified for next season's Champions League when they guaranteed a top-four finish in the Premier League last weekend, Chelsea can bring an uplifting end to Sarri's troubled first season in charge by lifting the Europa League.

Former Napoli boss Sarri this week claimed Chelsea "deserve" to win a trophy this season and the Italian is now one victory away from the first major prize of his managerial career.

However, Sarri is not happy that Chelsea will play a friendly in the United States against New England Revolution next week.

The match is designed to raise awareness and money for antisemitism and anti-discrimination causes.

"Now we need to rest. Unfortunately we have to go play in the United States because I think in this moment we need to rest then we have 10 days to prepare the final," said Sarri.

"We have to recover energy because we are very tired."

Inevitably, Hazard was the catalyst for Chelsea's 28th minute opener as he twisted and turned to find just enough space for a perfectly-weighted pass to Loftus-Cheek.

Hazard's vision and execution completely flummoxed the Frankfurt defence, leaving Loftus-Cheek with plenty of time to guide a cool low finish into the far corner for his 10th goal of the season.

But Chelsea couldn't turn their first half superiority into further goals and a fatal loss of concentration allowed Frankfurt to equalise in the 49th minute.

Jovic had scored Frankfurt's goal in the first leg and the 21-year-old Serb showed why he is being linked to Real Madrid with another predatory finish.

Chesting the ball down to Mijat Gacinovic, Jovic easily eluded the dozing Luiz as he ran onto the return pass and calmly steered in his 10th Europa League goal this season.

Still lacking any rhythm in extra-time, Chelsea needed an agile goalline clearance from Luiz to stop Sebastien Haller's shot before the Frankfurt forward was denied again by Davide Zappacosta's header off the line.

Azpilicueta thought he'd won it for Chelsea in the closing minutes when he bundled home after Trapp dropped Hazard's cross, but the goal was controversially disallowed for the Spaniard's challenge on the keeper, setting the stage for Kepa and Hazard to see the Blues through to Baku.