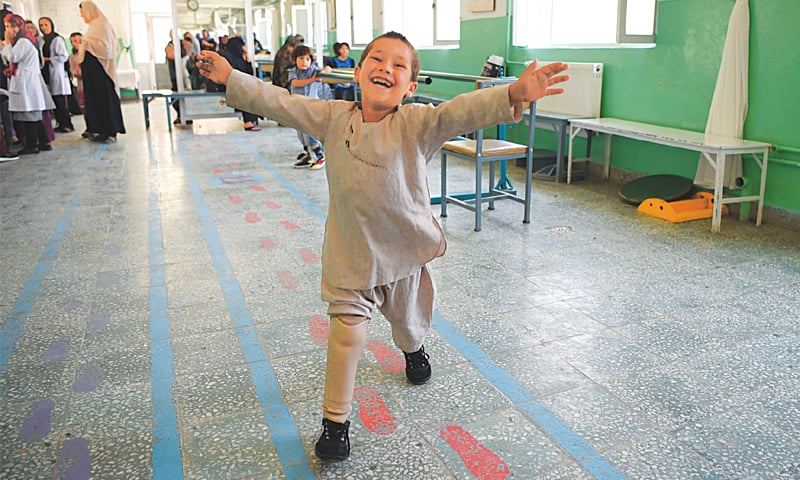 With his hands in the air and an infectious grin spreading from ear to ear, a young Afghan boy whirls around a Kabul hospital room on his new prosthetic leg.

The boy, five-year-old Ahmad Sayed Rahman, has captured hearts in Afghanistan after a short video of him effortlessly dancing on his new limb was posted this week on Twitter.

"He is always dancing and showing how happy he is to have an artificial leg," the boy's mother, Rayeesa, told reporters at the Red Cross orthopaedic centre in the Afghan capital on Tuesday.

"I'm so happy for him that he's received this artificial leg and that now he can be independent," she added, as Ahmad danced to music blasting from a mobile phone.

Ahmad, whose leg was amputated below the knee when he was only eight months old, is a long-time patient, his physiotherapist Semeen Sarwari said.

Because he's growing fast, he has needed a new leg every year or so. This new one is his fourth.

"He's a child and wants to play, he wants to have a leg so is adapting quickly," Sarwari said.

"He doesn't want to sit around inside."

Ahmad and his parents, who are farmworkers, come from Logar province south of Kabul, where fighting between the Taliban and the US-backed Afghan army is frequent.

His mother said Ahmad and his sister were caught in the crossfire of a battle, and both children were seriously wounded.

Ahmad received his first prosthetic at age one, and soon learned to dance, his delight clear for all to see.

More than 500,000 people had watched the video clip on Twitter within a day of it being posted on Monday.

By Tuesday, he was showing off his skills to reporters in Kabul and was the top story on evening news programmes.

The video has attracted hundreds of admiring comments, with some people even offering to help.

"This is the smile of victory over all odds of life ...god bless you dude" one Twitter user wrote.

"Extremely amazed by the paradox of happiness & grief in this video!" wrote another.

In 2018 alone, 3,804 civilians -- including more than 900 children -- were killed in Afghanistan, and another 7,000 more were wounded, according to the United Nations. It was the deadliest year yet for civilians in Afghanistan's conflict.

Tadamichi Yamamoto, head of the United Nations Assistance Mission in Afghanistan, said a "shocking number" of civilians are still being killed or maimed and called on all parties to do more to safeguard them.

Peace talks are ongoing between the US and the Taliban but are moving slowly, adding to the anguish of everyday Afghans who have no idea what the future might hold for their country.

Ahmad's video was shot by Mulkara Rahimi, another physiotherapist at the Red Cross centre.

In her 10 years of professional activity, she's seen many patients like him.

"Because he was so happy about the new prothesis, I just wanted to save a record of the happiness," Rahimi says.

"That's why I posted that video," she added, noting such moments were her reward for her difficult work.

The original video of Ahmad dancing can be seen at: http://u.afp.com/JYuD