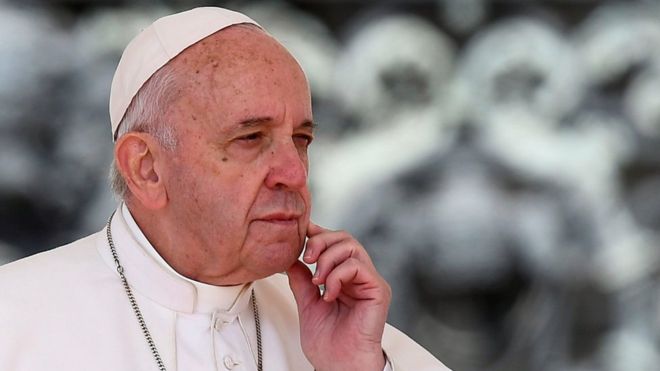 Pope Francis has made it mandatory for Roman Catholic clergy to report cases of clerical sexual abuse and cover-ups to the Church.

In an Apostolic letter, which is set to become Church law, he makes clear that any sexual advance involving the use of power will now be considered abusive.

The clarification is being seen as a message to the Church hierarchy that no-one will be exempt from scrutiny.

The Pope promised in February to take concrete action to tackle abuse.

The new Apostolic letter makes clear that clerics should also follow state law and meet their obligations to report any abuse to "the competent civil authorities".

The new guidelines were welcomed by some Vatican commentators, who argued that they broke new ground in attempts to end Church sexual abuse.

A change in how crimes will be investigated

The Pope's decree is meant to change the way the Church investigates cases of abuse.

For the first time, clerics and other Church officials will be obliged to disclose any allegations they may have heard. Previously, this had been left to each individual's discretion.

Reports are expected to be made within 90 days to offices within Church dioceses. The decree also defines the covering-up of abuse as a specific category.

The Church's senior leaders - its bishops - are specifically included in this. That is because in many documented cases bishops covered up crimes of priests who reported to them. The decree does not change the penalties for crimes committed.

How exactly are the offences defined?

"The crimes of sexual abuse offend Our Lord, cause physical, psychological and spiritual damage to the victims and harm the community of the faithful," the Pope writes in the letter.

The guidelines further cover "actions or omissions intended to interfere with or avoid civil investigations or canonical [Church] investigations, whether administrative or penal, against a cleric or a religious" for sexual abuse.

How much pressure is the Pope under?

He is under serious pressure to provide leadership and generate workable solutions to what is the most pressing crisis facing the modern Church - one which some say has left its moral authority in tatters.

When he was elected in 2013, he called for "decisive action" on abuse but critics say he has not done enough to hold to account bishops who allegedly engaged in cover ups.

Thousands of people are thought to have been abused by priests over many decades, and the Church has been accused of covering up crimes around the world.