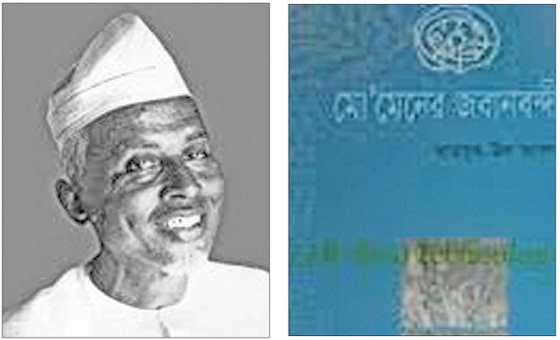 ‘Freedom began on the day the first sheep wandered away from the herd’. The statement by Marty Rubin clearly defines the trait of a non-conformist. A non-conformist is a person who does not conform to the conventionally and traditionally established ideas. He challenges the prevailing practices and try to establish a more radical, practical and realistic view. On the basis of this concept, Mahbub Ul Alam (1898-1981), a Bengali Muslim writer, was a nonconformist. He is a lesser known, but a very important literary figure of Bengal. He has contributed a progressive dimension to the world of Bangla literature. His works are bold in expression and beautiful in aesthetic sense. This year on 1st May, the bard turned 121. Though he is not physically alive, his works, which are still relevant and important, are significantly alive in the readers' mind and philosophy.

Mahbub Ul Alam was born on 1st May in 1898 at Fatehpur in Chattogram in a very reputed Moulvi family. His father, Moulvi Nasih Uddin was a progressive and educated "alem". His mother, Mrs. Azimunnesa, was a learned and conscious lady. Although his family was well-known for being religious, they were respected for being progressive, educated and cultured family too in the locality. Mahbub received his education in Chattogram. After passing Entrance exam, he got married at the age of 18 only! So, he learned to take the responsibility of an entire family and its members at a very early age. He directly took part in the First World War at the age of 19. We know that our rebel poet Kazi Nazrul Islam also fought as a soldier. Mahbub and Nazrul were colleagues in the 49th Bengali Paltan of British Indian Army stationed in Karachi. However, many of us do not know that Mahbub went even further. He went to Mesopotamia (now Iraq) and served there for three years until the Paltan was broken up in 1920. It is said that "a pen is mightier than the sword". Mahbub is one of the very few literary figures who fought with both pen and ammunition. He was brave, courageous and consistent to finish his duty in the regiment. This bravery and consistency helped him become a very important writer of a remarkable book which is on the liberation war of Bangladesh.

Mahbub Ul Alam is best known for writing novels and historical books. If we read his historical pieces, we can know a lot about him as well as the war phases he had gone through. He wrote about his life in Bengali Paltan in his book Paltan Jiboner Smrity. In his book Bangalir Samorik Oitijho (The Military Tradition of the Bangalies), the bard has documented his life as a warrior. Another notable and a brave addition to the history of making and remaking Bangladesh is his book Bangalir Muktijuddher Itibritto (the Complete History of the Liberation War of the Bangalies). This 670-page long book was compiled by the author at his old age. He interviewed many common people from hundreds of villages. It took him two long productive and hardworking years to finally complete the compilation. This book is considered the first thorough documented history on the liberation war of Bangladesh. I wonder how could a man of 75 years old physically work really hard to compile all the authentic information about the war! He was surely a different kind of writer this land has ever produced.

Mahbub Ul Alam's best known work is his automatical novel Momener Jobanbondi (1946) which was translated in English titled The Confession of a Believer by Lila Roy. In this novel, the narrator beautifully narrated his life and the way he became a true believer. His journey to know about the supreme Being is quite a common journey. Almost everyone goes through the same kind of phases while gathering knowledge about Allah--the Supreme Being. The book is narrated from three perspectives--a child, an adolescent and an adult. After going through a massive confusing psychological turmoil, the narrator finally confesses that "Allah is the most dynamic centre of one's life". Professor Emeritus Sirajul Islam Chowdhury wrote an introduction in the second edition of the book. He rightly pointed out that the writer believed in self-criticism. It requires courage, honesty and rightfulness to criticise one's own inabilities. Mahbub ridiculed this own conventional belief about Allah. In Hegal's word, the concept of Allah disclosed to him as "one damn thing after another". He confessed that he used to think that Allah might be the clouds in the sky. To the child narrator, Allah seemed a giant masculine figure. Sometimes, the narrator irrationally believed in bianry opposition and thought that Allah would be the opposite force of Satan. However, finally he realised what the existentialist Soren Kierkegaard said that "the tendency to prove Allah's existence will only make Him an object". So, he started looking for him in the inwardness. And he realised that Allah lives within one's heart. He cannot be found in the limited world. The limitless Allah cannot be perceived among the limited resources. So, in the process of becoming a believer, finally he confessed that Allah is the one who is to be loved and not feared. In this autobiographical novel, Mahbub Ul Alam depicted a patriarchal contradictory society of his time.

At that time, it was unimaginable that a Muslim Bengali writer could write such bold and straight forward piece like Mofijon--his famously acknowledge as well as ridiculed novella. Mofijon is named after its protagonist Mofijon who had suppressed her natural libidinal instinct. The novella deals with the oppressed female sexuality in a male dominated society. The readers, specially the Muslim readers, were not ready for such bold representation of a female body and its sexual arousal. Mofijon was mainly criticised by a number of scholarly critiques. Sufia Kamal, a very popular and notable Bengali poet, commented that, "everyone just blamed Mofijon, but nobody understood her pain". The nonconformist Bengali Muslim writer Mahbub Ul Alam brilliantly showcased Mofi's suffering. In one way, he wrote about a woman's hidden desire. But in another way, he just held a mirror in front of the readers who could see their own secret desires as they come to know the characters. The author beautifully played with human psyche.

Mahbub Ul Alam wrote a few books on short stories. His short stories reveal his philosophy and ideologies. For instance, in one of the stories titled "Prodhan Otithi" ("Chief Guest), the writer sarcastically criticised the hypocrisy of the people. Most of the people only focus on the social position of a person. A person of an ordinary position may not become the chief guest of any programme. But when the same person holds a much higher and more powerful position, he is respected by all and treated as an apple of everyone's eyes. The main idea and ideology of this story is that we must first respect the "human" inside a human being. Man is much more superior in status than his own social or professional position.

Mahbub Ul Alam was born on the day which is celebrated as the worker's day. For this reason, he loved to call himself "Sahitter Din-mojur" (the day-labourer of literature). It is a matter of misfortune that the bard is lesser known to this generation. His works are very important for the young students who have the revolutionary spirits to challenge and change the false and narrow ideas. Some of his books can be found in Friends Book Corner. Many of his books are preserved by Toitomboor publisher. Let's then buy and read the books written by this nonconformist writer and know more about our own selves. Happy birthday to the non-conformist Bengali Muslim writer Mahbub Ul Alam.

The writer is a Lecturer, Department of English Language and Literature Premier University Chittagong