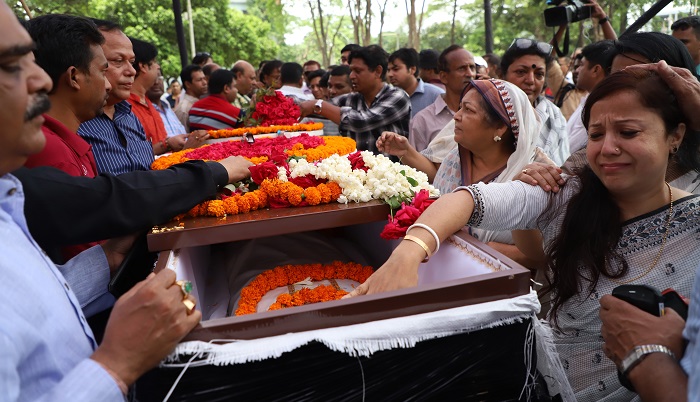 Eminent singer and music composer Subir Nandi’s funeral was held at Sabujbagh Borodeshwari Kali Temple and cremated at Sabujbagh cremation ground in the capital on Wednesday.

Earlier in the day, thousands of people of all walks of life paid their tribute to the legendary singer at the Central Shaheed Minar in the capital from 11am to 12pm.

Later, the body was taken to BFDC around 12pm where film actors and artistes poured tribute on his coffin with teary eyes.

A flight of Regent Airways, carrying the mortal remains, landed at Dhaka airport around 6:50am. Later, his body was taken to his Green Road residence.

No note: Subir Nandi died around 4:30am on Tuesday, at the age of 66, according to family sources.

On April 14, Subir suffered a heart attack after arriving at Combined Military Hospital (CMH), and was put on life support in the coronary care unit. He remained at CMH for 16 days, during which he had another heart attack.

On May 4, Subir suffered a third heart attack after being flown to Singapore. His health condition deteriorated once again on Monday, as he had suffered from multiple organ failure at the hospital.