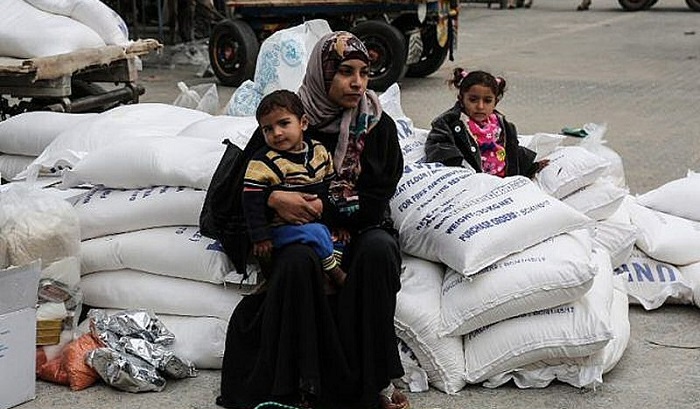 The UN warned Wednesday that its agencies providing food assistance to Gaza must raise tens of millions of dollars within weeks to avoid significant aid cuts.

The UN's World Food Programme and its agency for Palestinian refugees, UNRWA, currently provide food assistance to more than one million people in Gaza.

But the United Nations humanitarian coordinator for the Palestinian territories, Jamie McGoldrick, warned that the agencies were facing "a serious funding crisis."

They needed to raise money fast to be able to make a looming order for the food needed for the remainder of the year, he told journalists in Geneva.

"We envisage that if WFP and UNRWA don't get around 40 million dollars by the end of May - beginning of June, they will not be able to order the pipeline," he said.

UNRWA is planning to host a donor's conference next month and another one in September, as it struggles to fill the void after Washington, traditionally its largest donor, withdrew its support.

Last year, a number of countries stepped up to generously compensate for the lacking US funding, but McGoldrick said that this year a huge shortfall remained.

"If they don't get the funding, clearly they can't order the food," he said, adding that this would mean that in the second half of the year, either the number of people receiving aid will be cut or rations will be slashed, or both.

In Gaza, where unemployment stands at 54 percent and is much higher for young people, people do not have the purchasing power to fill in the gaps, McGoldrick said.

"There is no alternative," he said, describing the situation as "very, very serious."

It is not only the UN agencies providing food aid who are facing a shortfall.

McGoldrick said that the $350 million requested for UN's overall humanitarian response plan for the West Bank and Gaza so far this year was so far only 14-percent funded.

"There is something happening in terms of donor support to the Palestinian situation, which we have to better understand," he said.