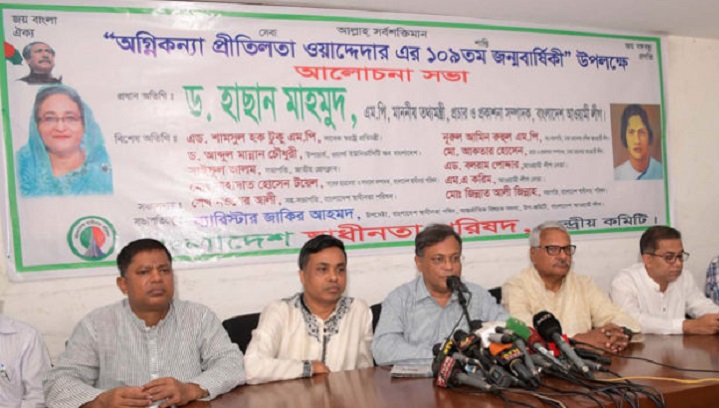 “Andlib Partha’s party (BJP) deserted BNP and several others will follow his footstep as because of a series of subsequent wrong decisions on its (BNP) part,” he told a discussion at an auditorium of Jatiya Press Club here.

Moreover, he said, several BNP leaders by now quit the party as they were not willing to do politics under corrupt leadership while its acting party chief Tarique Rahman himself was a convict.

Hasan said the political degradation has become a common phenomenon after killing of Father of the Nation Bangabandhu Sheikh Mujibur Rahman in 1975.

“Ziaur Rahman formed BNP involving greedy leaders. Many top leaders of BNP, including Mirza Fakhrul Islam Alamgir, Moudud Ahmed and Rizvi Ahmed, were belonged to other parties. But, they joined BNP only for enjoying power,” he added.

He said BNP now turns into an isolated party for its continuous political mistakes. Now many leaders are leaving BNP, he added.

Hasan, also the publicity and publication secretary of the ruling AL, said BNP is a terrorist party, which is also proved at a foreign court. “BNP’s leader Tarique Rahman is a convicted criminal and he is now trying to create anarchy in the country from London. The government is trying to bring back Tarique from London to implement the court verdict,” he added.

The minister urged the top BNP leaders to change the leadership for reestablishing the party as political one.

Hasan said Pritilata Waddedar was a Bengali revolutionary nationalist from the Indian subcontinent, who was an influential one in the Indian independence movement. “After completing her education in Chattogram and Dhaka, she attended Bethune College in Kolkata. Pritilata graduated in philosophy with distinction,” he added.

After a brief stint as a school teacher, he said, Pritilata joined a revolutionary group, headed by Surya Sen. She led a team of fifteen revolutionaries in 1932 attack on the Pahartali European Club, which had a sign board that read “Dogs and Indians not allowed”.

The minister said the revolutionaries torched the club and were later held by the British police. To avoid arrest, Pritilata ate cyanide and killed herself.

He urged the journalists to focus the life and politics of Pritilata as the new generation could get inspiration from her.

After placing a wreath, the minister remembered the outstanding contribution of Subir to music, saying “Subir Nandi was a legend in the cultural arena.

Subir Nandi sang over 2,500 songs during his 40 years long musical career as he rendered a lot of popular songs on Bangladesh Betar, Bangladesh Television and also Bangla films, Hasan added.