Tagore's Tryst with Flowering of Soul 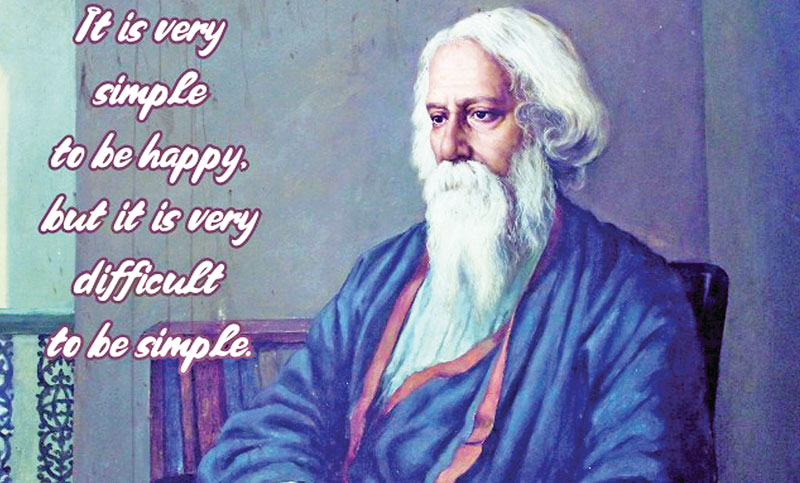 Great poets like Tagore are invariably spiritual, may be, of a distinctly different genre, springing from their pursuit of truth, beauty and deeper meaning of life. In the case of Tagore bookish philosophy was transformed into living spirituality, which was experiential, ecstatic, introspective, poetic and mystic with a unique blending of these together as is evident from his music, poetry and prose compositions. Flowering of spirituality in him which is simultaneously monistic, pantheistic, monotheistic, dualistic and mystic can be an interesting subject of study on his 158th birthday today.

The poet said, “Everyone has something special called ‘my religion’...which is his religion? The one that lies hidden in his heart and keeps on creating him.” Religion is the deep driving creative impulse in man which constantly keeps him engrossed in discovery of life in the context of creation, cosmos, time and eternity.

The subject is quite complex as the poet was born in a Brahmo family propagating monotheistic concept of the formless Absolute. While his natural attraction adhered him to the dualistic mystics of the medieval Bhakti-cult, and his boundless poetic temperament was not compatible with any belief system imposed from outside. Hence, like his songs his religion flowered from within in and through his intimate engagement with nature, love, humanity and aspiration for something afar from the sphere of imprisoned finitudes.

The process involved can be appropriately termed as discovery of life. Seized by a sense of utmost limitation of our psychophysical existence the poet periodically experienced expansion of consciousness. In childhood he read “Jal pare pata nare.”(It rains, leaves tremble). Immediately he glimpsed the interconnectedness of the universe and an inherent rhythm in creation. Later on he felt he was one with people moving in the street, the sunshine and vibrant life all around which was expressed through his ‘Awakening of the Waterfall’. He had similar experience in Shilaidaha later on.

As he was born and brought up in a traditional Bhahmo family and was creatively associated with the religious celebrations of the same, it was natural for him to be influenced by the tenets of the said reformist group of the Hindus. But his boundless poetic temperament was incompatible with dogmatic approach derived from fixed faith. Moreover, his emotional affiliation was more with the medieval mystics. He was keen to acquire, own, experience and live the religion of man stretching from the fearless freedom of religious finitudes to the infinite ocean of spiritual peace lying in front.

Tagore firmly asserted that whenever we experience truth with whole of heart, head and sense of reasoning we behold the beauty of creation as manifestation of the Almighty, "I have received your company, beautiful, oh beautiful, my every limb is purified, my spirit is full of thanks....in this one life I sense infinite incarnations, beautiful, oh beautiful."

Tagore elaborated, “The progress of our soul is like a perfect poem. It has an infinite idea which once realised makes all movements full of meaning and joy.” This realisation and anchorage constituted the keynote of his spirituality. Worldly sufferings could never deviate him from the same; rather deepest sorrow invariably deepened his divine love. He asserted, “Clouds came floating into my life, no longer to carry rain or usher storm but to add colour to my sunset sky.”

Yeats discovered in him a unique saint ‘who had not refused to live but had spoken out of Life itself’. Because of his spiritual love for life he could be so daring, so passionate and above everything else so saintly. He did not seek deliverance through ascetic way of renunciation but through thousand bonds of delight with which the Omnipresent is also bound with creation, "In this playhouse of infinite forms I have had my play and here have I caught sight of him that is formless.

The poet felt adequate justification for keeping his eyes and ears open to creation, "My poet, is it thy delight to see thy creation through my eyes and to stand at the portals of my ears silently to listen to thine own eternal  harmony?" Needless to say, this interrogation is figurative and assertive.

His ‘Song Offerings’ for which he won Nobel Prize in 1913 offers sincere and redeeming self-opening and an overwhelming account of his divine romance with cosmic beloved with perpetual sorrow of separation caused by earthly obstacles  and endless ecstasy of union resulting from sublimation, which constituted a rhythmic art of his mystic  living. To experience the perpetual ecstasy of dualism he prayed, “Let only that little be left of my will whereby I may feel thee on every side, and come to thee in everything, and offer to thee my love every moment.” Thus he wanted to experience the Non-dual through dualism as he felt, “Thou art the sky and nest as well.”

The central theme of his poetry lies in discovery of the Formless within the forms and the Infinite within the finite. He clarified, “I have searched for the unknown within the known.” In a beautiful song he says, “I dive down into the depth of the ocean of forms, hoping to gain the perfect pearl of the formless.”

His experience became mystic with his divine romance with 'Jeevandebata' (God of life), who wanted to enjoy the magnificent feast of sight and symphony of this colourful universe through the eyes and ears of the poet to witness the eternal harmony of creation, resulting in endless delight in the heart of the poet. Being always anchored in his jeevandevata to whom the poet tendered absolute surrender he touched the third dimension of the miracle of existence. So he says, “MY desires are many and my cry is pitiful, but ever didst thou save me by hard refusal.....Day by day thou art making me worthy of the simple great gifts—this sky and the light, this body and the life and the mind - saving me from the perils of overmuch desire.”

Tagore explained, “These poems of mine are revelations of my true self to me... an expression of my innermost feelings, they were my humblest prayers, my sincerest sadhana and a reflection of joys and sorrows.” Incidentally, Nietzsche once wrote, “Every great philosophy is a species of involuntary and unconscious autobiography.”

He was basically a poet who merged poetry with spirituality with an altogether different perspective of life and an art of ecstatic living. The last word for him was the joy of spontaneous surrender.

The final words are the words of Christ like surrender amid awe and wonder, "Let only that little be left of my will whereby I may feel thee on every side, and come to thee in everything, and offer to thee my love every moment."    Tagore's melody of life and liberation have been fused in one parting prayer, "In one salutation to thee, my God, let all my senses spread out and touch this world at thy feet.