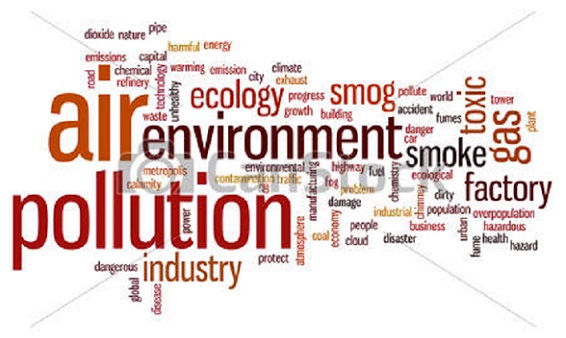 Air pollution has emerged as one of the major pollution threats to human health. Morbidity and mortality are increasing worldwide because of both chronic and non-communicable diseases contributed by ambient air pollution. The third annual State of Global Air report 2019 identified air pollution ranked as fifth risk factor of death – attributed to almost 5 million deaths around the world. Cardiovascular diseases, chronic respiratory diseases, respiratory infections and TB, diabetics, chronic kidney diseases and neoplasm are causes of these deaths catalysed by air pollution.
The study has found evidence of air pollution contributing on the development of type-2 diabetes – a bit surprise in studying non-communicable disease control. Moreover, life expectancy will also be reduced by 1 year and 8 months worldwide, which yield 147 million years of healthy life lost in 2017 causes by air pollution. These two measures, number of deaths and expected loss of healthy years, jointly summarised disease burden of air pollution. Findings also reveal that risk of air pollution is competing with risk of smoking (loss of 1 year and 10 months) to loss of life expectancy.
Reduction of number of deaths and illnesses from hazardous chemicals and air, water, and soil
pollution and contamination by 2030 is one of the sustainable development goals for Bangladesh. In order to achieve this goal, rigorous monitoring of air quality, control over sources of air pollution, identifying potential threats to reduce air pollution and taking necessary steps to eradicate those threats is required. Clear Air and Sustainable Environment (CASE), a project under Ministry of Environment and Forests, is aimed at supporting the adoption of Sustainable Environmental Initiatives (SEIs) in major polluting sectors such as urban transport and brick making industries.
In order to monitor air quality conditions, Air Quality Index (AQI) is constructed and reported on daily basis to measure the cleanness of air which focuses on direct health effect. The Department of Environment has set national ambient air quality standards on five pollutant criterions:  Particulate Matter (PM10 and PM2.5), NO2, CO, SO2 and Ozone (O3). AQI index value ranged from 0 to 500 with satisfactory index value is less than 100. The cut point values of AQI is good (0-50), moderate (51-100), cautious (101-150), unhealthy (151-200), very unhealthy (201-300) and extremely unhealthy (300-500). The average AQI index value of March 2019 was 185, followed by 235 in February 2019 and 284 in January 2019, which implies unhealthy ambient air in March and very unhealthy ambient air in the following months of January and February. The average AQI value was 134.42 in the year 2016 and 134.69 in 2017; both poses cautious air condition around the year.
The air quality of 2018 was near unhealthy with an average AQI value 148.8.We found that air quality becomes almost extremely unhealthy at January every year and tends to ameliorate. The quality of air in Bangladesh attains its best at mid-year (June to August) and starts worsening onward. A possible reason might be the rainy season appease our surrounding (refer to figure 1).
Bangladesh is ranked as fifth position among top ten countries with the highest mortality burden attributed to ambient air pollution in 2017. About 123,000 people had died in Bangladesh because of various types of diseases catalysed by air pollution in 2017. In order to meet sustainable development goals, we need to make and implement effective policies to reduce air pollution which will be linked up with remission of disease burden and increment of healthy life years. 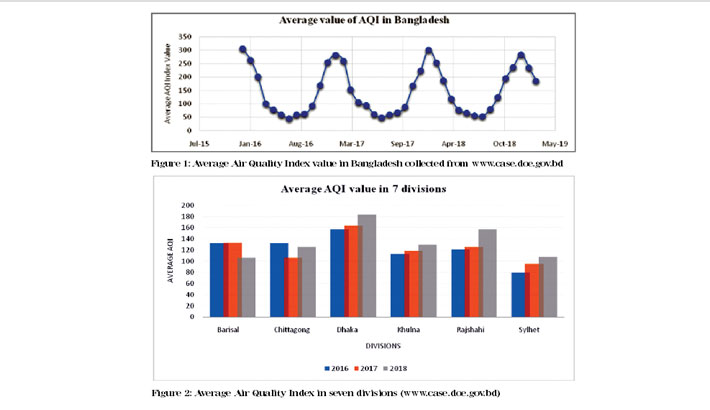 As children and old people are the most vulnerable, a joint collaboration of Ministry of Environment, Ministry of Education and Ministry of Health should be formed to monitor whether an air pollutant industry is sanctioned within critical region of educational institution or health facility. Old and harmful machines should be replaced by modern and environment-friendly tools and machines. However, government cannot resolve this issue alone. In particular, household air pollution through burning solid fuels (wood, crop wastes, charcoal, coal and dung) while cooking and in house smoking should be minimised. Better later than never; it is time to involve mass people with clean air movement through awareness creating campaign and programs.

The writers are Associate Professor and Research Associate respectively, Bangladesh Institute of Governance and Management.