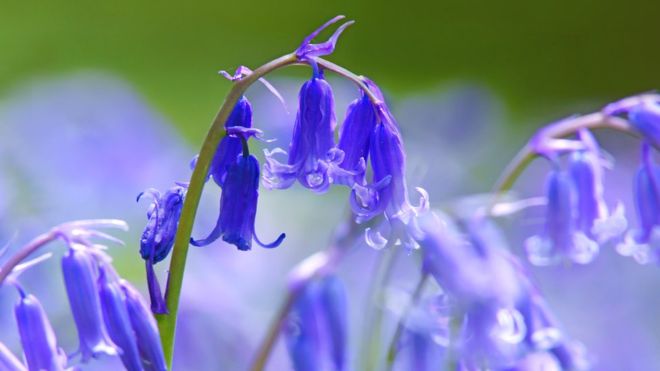 Fears that the British bluebell could go extinct are unfounded, say scientists.

The introduced Spanish variety has lower fertility and is unlikely to wipe out the native plant, according to genetic tests.

The Spanish bluebell's escape into the wild has raised concerns that the two plants could mix, leading to the loss of one of the spectacles of spring.

The violet-blue flowers appear in April and May, carpeting the woodland floor.

It turns out that the British bluebell has a genetic advantage.

"The greater fertility of the native British bluebell coupled with the huge numbers of individuals that exist in the wild means that it's got considerable resilience against any threat from these introduced plants," said Prof Pete Hollingsworth, director of science at the Royal Botanic Garden Edinburgh (RBGE).

The British bluebell is one of the nation's best-loved plants, with 50% of the world's population found in the UK.

What is a bluebell?

Millions of bulbs can be found in just one ancient woodland, giving rise to carpets of flowers in April and May.

The Spanish bluebell, Hyacinthoides hispanica, was introduced into the UK by the Victorians as a garden plant and can be found today alongside the native bluebell in woodlands as well as on road verges and in gardens.

How do you tell which type of bluebell is which?

The two plants look similar but have some tell-tale differences:

Spanish bluebells have broad leaves, pale blue conical-bell flowers, with spreading and open tips, and flowers are found all around the stem. They have upright stems, no scent, and coloured pollen inside.

Native bluebells have narrow leaves, deep violet-blue (sometimes white), narrow, tubular-bell flowers, with tips that curl back, flowers on one side of the stem, distinctly drooping stems, a sweet scent, and cream-coloured pollen.

What does the study show?

In research to look at the potential genetic threat, the Spanish bluebell was planted next to the British bluebell in large numbers and allowed to breed naturally.