Politics of Oath-Taking and Future of BNP 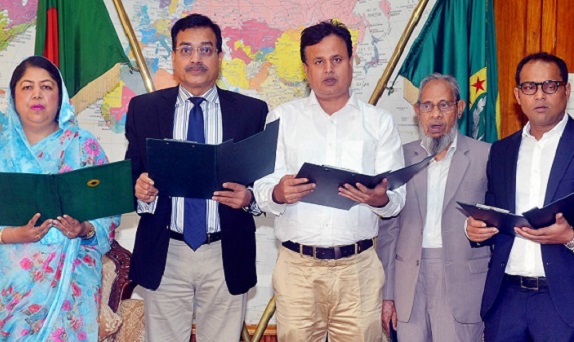 After the election that took place on the 30th of December 2018, Sheikh Hasina took over the responsibility of administering the country for the third consecutive terms as the Prime Minister. The election result shows that the Oikya Front had to accept a substantial defeat in the election as they could manage to win only 08 seats (among them 6 seats were won by the BNP candidates while the rest two seats were won by the Gono Forum candidates). Despite opposition’s allegation of wide-ranging manipulation in the election, they have yet to come up with clear shreds of evidence that speak of the fact that the ruling party rigged the election.

After the election, the parliament was formed in absence of the Oikya Front parliamentarians. The Oikya Front, including the BNP leaders, vehemently voiced their views against the oath-taking as the parliament member. But, the situation changed dramatically when the Gono Forum candidate Sultan Mohammad Mansur first expressed his desire to take an oath as the member of the parliament on the ground that the people of his constituency have voted for him to go to the floor of the house to speak for their welfare and facilitate their development. After a few days, the other Gono Forum candidate Mokabbir Khan also took an oath.

Through their oath taking the bonding among the Oikya Front leaders started to become lost. The BNP leaders did not accept the issue of the oath-taking positively. Rather, they expressed their displeasure on the oath-taking of Gono Forum leaders in different public forums. Even the Gono Forum leadership was found divided on the issue of the oath taking of their members in the parliament. Both the parliamentarians have publicly stated that they have taken an oath on the recommendation of their party president. But, a number of leaders, including the party general secretary and the executive president were very much critical about their decision to take an oath violating the party decision.

Even the activities of the Gono Forum leadership were found rambling as they spoke differently at different times. Although a show cause letter was issued against Sultan Mohammad Mansur, he was found visiting the party president many times. The issue of Mokabbir Khan has also drawn the attention of the countrymen. Although the party leadership was found highly critical about his decision, he was seen to sit beside the party president in the party convention. This shows that there is a difference of opinions among the party leadership which is a serious challenge for the party.

As the issue of BNP’s politics is concerned, they vehemently were expressing their negative views about their participation in the national parliament. They were of the opinion that if they join the floor of the house, they would provide legitimacy to the election that was manipulated. Thus, they were against the oath-taking. But, as the days progress, the situation started to change as there were speculations that most of the elected parliament members were interested to take oaths as the member of the parliament. Of course, the senior leaders who could not win the election were very manic about the oath-taking. Having observed them I have got a feeling that these leaders were taking their stand against the oath-taking from the personal ground as they failed to win the election.

The situation changed dramatically when we saw that one of the BNP's lawmakers took an oath a few days ago. The central leadership of the party expressed their strong discontent in this regard. They also condemned the government for creating pressure through their administrative machinery on their parliament members for taking oaths. But, there was news on the air that the rest of the five elected parliamentarians were very keen to take oaths. And all speculations came true when we witnessed that four of the BNP's parliament members took oaths on the last day of April. Interestingly, the party general secretary did not take an oath as the member of the parliament.

Under the above circumstances, it can be said that the BNP has been passing through the most difficult time since its inception. There is every possibility that the party leadership may get alienated on this issue of taking oath. In this juncture, the party leadership has taken the decision to endorse the oath taking. I have also a feeling that the decision of the general secretary to refrain from the oath-taking is also a part of the party's decision. They are very keen to make the senior leaders of the party satisfied who were against the oath taking.

Considering the gravity of the current political situation of the BNP, it can be asserted without hesitation that they lack the strength to organise a movement for making Khaleda Zia free from jail. Most importantly, the party leadership has understood this reality. Thus, there is a possibility that they might agree to reach an agreement with the government to make Begum Zia free on parole as it is their first priority. If Begum Zia leaves the country, there is every possibility that the party will become weaker as the absence of Begum Zia and Tarique Zia will make it grim for the party to fight back. The supporters would not find any motivation to remain engaged in any kind of movement. On the other hand, if the ruling party could manage to complete their tenure without any obstacle, the BNP as the main opposition would be thrown in the black hole of Bangladeshi politics. Of course, the absence of the main opposition is not at all good for the practice of a successful democracy. Thus, we expect that all political parties would try their best to come on the right track and do politics for the welfare of the country.

A number of important issues have come out from the BNP’s decision to join the parliament. First: Is it an outcome of the negotiation with the government which was being discussed in the media for a couple of months? If Begum Zia gets the bail or parole to go abroad for medical treatment, the speculation will come true. Second: By joining the parliament, the BNP has given legitimacy to the last election. Thus, the government would come hard on them in every issue. Third: People would lose confidence on the party as they are changing their stances every now and then. Even on the day of the oath taking of the four party lawmakers, Mr Rizbi briefed the media that their parliament members would not take oath. He also asserted that Tarique Zia had not been notified on this issue. On the other hand, after a few hours of the briefing, the party general secretary came up with another briefing where he claimed that the party winners took an oath on the direction of the party co-chairman. This is also indicative of the fact that the party is suffering from a stern coordination problem with a strong difference of opinions among them. The decision of the party to endorse the oath-taking has also widened their relationship with other partners of the Oikya Front. If it continues, the days are not very far when the party men would lose confidence on the party leadership which would be upsetting for them. Thus, the BNP should consider their political strategies if they really want to make their existence vivacious in the political environment of the country.

The writer is a Professor of Public Administration and an Additional Director of the Institutional Quality Assurance Cell (IQAC) of the University of Rajshahi, Bangladesh.