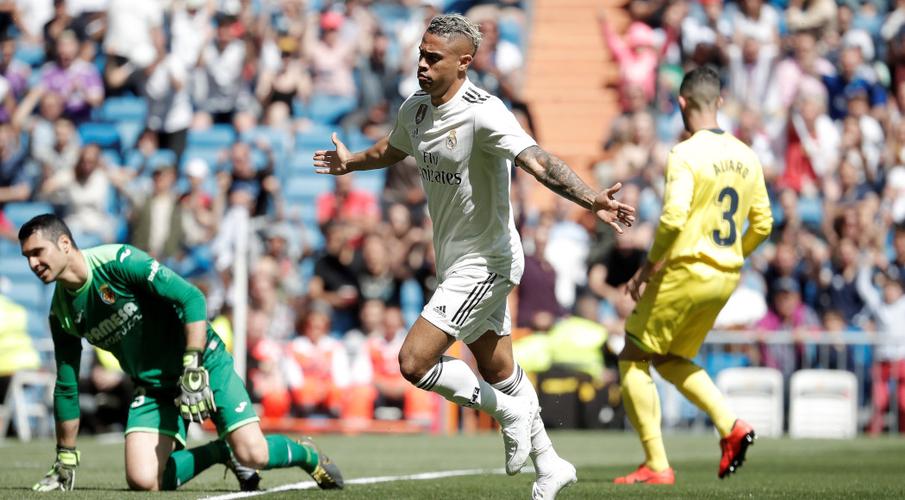 Real Madrid delivered a winning response to Zinedine Zidane's stinging criticism as Mariano Diaz scored twice in a 3-2 victory over Villarreal on Sunday.

An angry Zidane questioned the attitude of his players after last week's 1-0 loss to Rayo Vallecano and reacted by making more changes, with Luka Modric and Gareth Bale not even included in the squad.

Instead, youngsters like Jesus Vallejo, Brahim Diaz and Federico Valverde were given chances to impress, along with Mariano, who has barely been used since joining from Lyon last summer.

His two goals, either side of Vallejo scoring his first for the club, were enough, despite Jaume Costa pulling a late goal back for Villarreal to set up an unexpectedly nervy finish.

Madrid would need to win both of their remaining matches and Atletico lose both of theirs to prevent Diego Simeone's side finishing as the top team in the capital for the second year running.

But more of a concern for Zidane will be the 15-point gap behind Barcelona, which would likely be even bigger had the already-crowned champions not rested players for the Champions League in recent weeks.

Zidane warned Madrid's expectant fans on Saturday that much of his current squad will still be at the club next season but this felt like another exercise in experimentation, inside a Santiago Bernabeu that looked only a little over half full.

Mariano's display begs the question whether he could have been more useful during a campaign where his team have struggled for goals.

In that regard, the sight of Vinicius Junior coming off the bench here and making his first appearance in two months after recovering from injury will also have been a welcome boost.

Mariano had scored inside two minutes, prodding in after Santi Cazorla had been robbed in midfield by the energetic Brahim.

The advantage lasted only nine minutes as this time Casemiro was caught napping in his own half, allowing Gerard Moreno the chance to fire past Thibaut Courtois at the near post.

Madrid settled as Dani Carvajal hit the post from distance before Vallejo put them back in front shortly before half-time. Marcelo weaved in from the left and his blocked shot fell at Vallejo's feet, the 22-year-old finishing from four yards.

Madrid made it three early in the second half, Mariano tapping in Carvajal's cross before Vinicius came on to a warm reception with 16 minutes left.

An otherwise comfortable afternoon ended frantically as Costa, on off the bench planted the ball past Courtois, and there was still time for one more Villarreal attack.

Xavi Quintilla might even have snatched an unlikely draw but, free at the back post, he skewed his finish wide. Madrid held on.