Decentralisation urged for the development of real estate industry 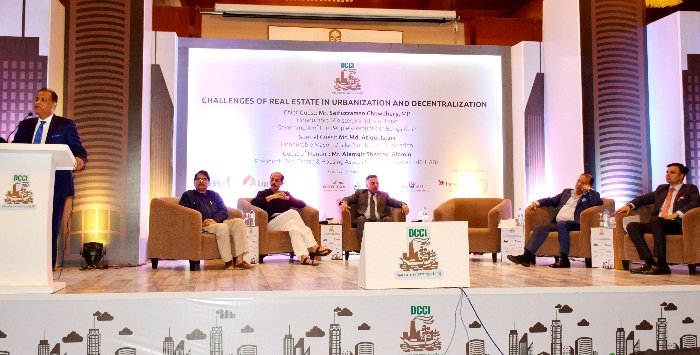 He disclosed this while attending a seminar on ‘Challenges of Real Estate in Urbanisation and Decentralisation’, held at a hotel of capital on Sunday.

In the address of welcome, DCCI President Osama Taseer said, “65% of our GDP comes from the urban economic sectors but due to unplanned urbanisation, Dhaka is in the second position in the index of unlivable cities in the world.”

Identifying lack of infrastructures, weak communication and transportation system and excessive dependency on Dhaka as major challenges to planned urbanisation and balanced decentralisation, he also said, “Government’s initiatives of establishing 100 economic zones will help expedite decentralisation of Dhaka as well as other big cities and ensure development of real estate sector”.

Dhaka North City Corporation mayor Md Atiqul Islam also emphasised on planned urbanisation of Dhaka city and said, “The DNCC is going to launch "Nagorik App" soon and city people will get online facility using this app. Moreover, 27 playgrounds with modern facilities will be opened for mass people of the capital soon.”

Mentioning the hand-over of nearly 2,00,00 apartments and 70,000 plots to the customers by the registered developers,  REHAB president Alamgir Shamsul Alamin said, “We need to take cities to the rural areas. In this regard, we need to adopt satellite township model for the development of real estate sector in Bangladesh.”

Alamgir Shamsul Alamin also requested the government to reduce registration fees on apartment and plot sale as well as to reduce bank interest rate for this sector.