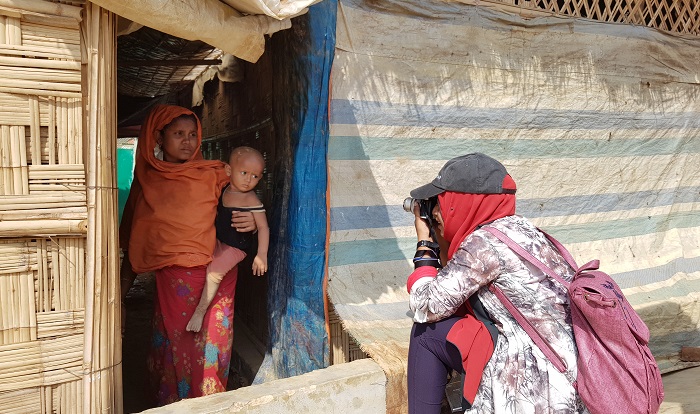 A total of 16 young men and women from Rohingya and host community in Cox’s Bazaar were trained on photography and visual storytelling at a National Geographic Photo Camp which ended in Ukhia on Saturday (May 4).

Internews in partnership with Bangladesh NGOs Network for Radio and Communication (BNNRC) organised the photo camp with support from the United States Agency for International Development.

Four instructors from National Geographic trained the youths in Ukhiya, Cox’s Bazaar at the camp, which was organised around a central theme of ‘peaceful coexistence’ between host and Rohingya communities and explored issues of identity, tolerance and diversity.

The training ended yesterday (Saturday) with a presentation of the pictures taken by the students at the photo camp which started April 29. The students have shot more than 40,000 photographs in the last five days under the watchful eyes of the Nat Geo instructors.

Working around a central theme of peaceful coexistence, the students have photographed in diverse locations such hospitals, market places, madrassahs, temples, water pumps, schools and Child Friendly Space (CFS). They've also documented their own lives in the camps and host communities in detail.

“The objective of the Nat Geo Photo Camps is to give voice and agency to young people through the tools of photojournalism,” said Zain Mahmood, Country Director of Internews Bangladesh.

Selected participants have received classroom and field-based instruction in digital photojournalism and editing; worked in multi-ethnic teams to shoot and produce thematic photographs as part of a Camp competition; and have participated in photo exhibitions showcasing their work and the Photo Camp process.

A group of photographers and photo editors has worked in Bangladesh to provide the participants hands-on training in photography. Lead instructor Matt Moyer and William Daniels are accompanied by Nat Geo staff Jon Brack and Jessica Elfadl for the Photo Camp.

During each workshop, young people are loaned digital cameras for the duration of the programme.  Through assignments and lectures, they explore and document their communities in context with the overall theme.

The Camp also assigns students to write about their experiences and the themes they are exploring. Their work culminates in a public slideshow and presentation on the final day of the camp, and/or an onsite print exhibition.