Experience of visiting a police station

Bundle of responsibilities lies under a dedicated police officer 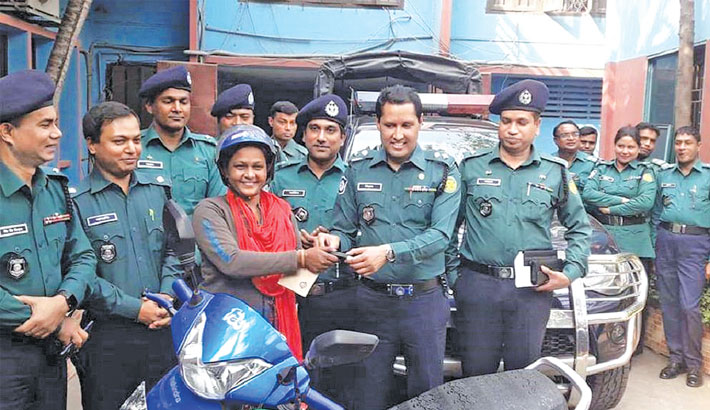 It shall be the duty of every police officer to promptly obey and execute all orders and warrants lawfully issued to him by any competent authority to collect and communicate intelligence affecting the public peace, to prevent the commission of offence and public nuisance, to detect and bring offender to justice and to apprehend persons breaking peace, and it shall be lawful for every police - without a warrant, to enter and inspect any drinking shop, gaming house  or other place of loose and disorderly characters.

Under section 167(5) of Code of Criminal Procedure – for magistrate to triable case; time limit of investigation is 180 days. And for session triable case, it is 360 days. This time bar is applicable for penal code cases. Cases other than penal code cases have special investigation timeline. Investigation officer generally seek time for investigation. He has extra duties especially during political unrest and when ministers or higher officials visit the local area (protocol duty).

Since investigation generally assigned to an investigating officer (IO) they basically conducted preliminary question to accused, will take all necessary evidence, photos, sketch, place of occurrence map and take the samples (drugs, blood, footprint and other evidences) which are related to the case and send it to the lab for forensic investigation. IO can be the Officer in Charge (OC) himself or anyone else not below the rank of Sub Inspector (SI) (for cognizable offence) Or A.S.I (for non-cognizable offence). There is a new post created in the police station called Inspector (Investigation) who is in charge of supervising investigation.

A question was arising about remand petition and when it was granted by the police. In remand, law says that to prohibit any kind of physical persecution. But in practice accused person, in most cases, does not want to confess his/her guilt unless police persecute them. Officer further added, in Bangladesh the jail system is not appropriate, moreover there is no reformation center in jail custody, so that habitual culprit conducts same crime or more grievous offence repeatedly. He added that in foreign country there are Closed Circuit Television footage in ubiquitous, so the evidence are easily accessible to the  police officer and  there is no option on the side of the accused that he does not confess his offence.

By conversation a question was raised to the officer in charge about political pressure to arrest any accused or on the time of conducting investigation. Officer confesses that, they often receive persuasion from different authoritative people which cause interference with performing duties but they are not bound to obey such direction. Officer added, they usually work as per law and order and also actual offender does not emancipate from them for any kind of influence.

Although people have false-belief that police abuse this power to harass the people and use special power act. However, according to inspector of the police station, they show a lot of mercy and gives chance to the offender. Nonetheless, when they see any grievous offence, then they use it but it’s very rare case.

Police stations located in Metropolitan areas are in their ascendancy, as they ensure safeguard for millions of people. Whereas the logistic or coordination support and number of vehicles which is provided for their service is not adequate, rather it’s merely limited.

On the question of General Diary (GD), we got some interesting information which was not in our text book. Indeed the police stations typically open at 8 am and they count one day from this 8 am to next 8 am in case of maintaining GD. Police Inspector said that, even it is kept in the GD as an entry when the Police Station gets cleaned. That we went for inspection of the Police Station even this was also mentioned in GD. Generally each and every movement in a Police Station is kept in the GD. But as we know they keep any general information in their General Diary.

The officer in charge said that they are focused to dissolve petty crimes by out of court settlement by following Alternative Dispute Resolution (ADR) method, rather than following the criminal justice procedure where the police act as a mediator. However, it should be mentioned that offence which is compoundable in nature and must not be a cognizable offence should be tried to be dissolved under ADR method.

People of our community should realise the greatness and dedication of police in our society. They regularly conduct their duties monotonously to ensure peoples safety. We denounce police for many apprehensions but there is no doubt about their dedication towards society and to make it crime free. Police officers play a vital role in our society.

In Police Act and Code of Criminal Procedure there are lots of rules and regulation asserted for the police. However in practical scenario the police officer are not capable of maintaining all the rules and order for various reasons. Thus, in very different occurrence and circumstances of offence, collecting evidence, medical certificate, chemical report, insufficiency of many necessary things, lower speed limit of police vehicle sometimes it takes huge time and it may raise difficulties for them, where following all the rules and order may create more challenge for them in performing their duties.