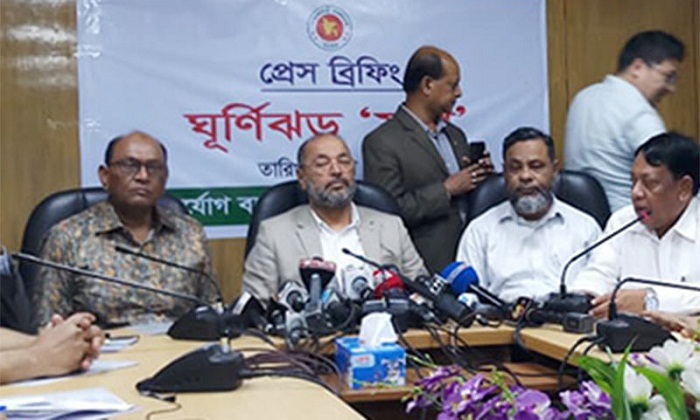 The ministry of disaster management and relief said four people were killed and 63 others injured by cyclone ‘Fani’ till now.
Ministry's senior secretary Md Shah Kamal made this official announcement on the loss of lives due to ‘Fani’ at a press briefing held at the office on Saturday noon.

Shah Kamal said, “Of the deceased, two are from Patharghata of Barguna district, and one from Bhola and Noakhali respectively. Sixty three people were injured due to Fani in several districts.”

Rahman, however, said the ministry was yet to compile the details of the casualties and damages caused the cyclone.

“The detailed information from all the affected districts is yet to reach us, give us 24 more hours we will let you know the details gathering the information,” he said.

The severe cyclonic storm, which entered Bangladesh through the southwestern region earlier this morning, also wounded several people though it weakened strength while barreling to Bangladesh overland.

Over 1.5 million were evacuated overnight from their homes to take makeshift refuge at cyclone shelters and other safer places while Kamal urged them to prepare for returning home.

Meanwhile, Met office said the cyclone danger was now over but the inland water transport authorities, however, kept enforced its order suspending movement of launches and ferries in view of adverse weather.

Meteorologists earlier today said the storm swept over the country in the form of a “land depression” with a maximum wind speed of 40-50, rising to 60 kph in gusts.

In Barguna, Nur Jahan, 50, and her grandson Zahidul Islam, 8, died after a tree fell on their home when they were asleep around 3:00 am due to the effect of approaching Fani at Charduani village in Patharghata of Barguna, police said.

Upazila administration said one Rani Begum, 50, wife of Shamsul Haq died as a house collapsed and fell on her in Balia Koralia village Bhola Sadar upazila in the early hours of today.

A two-year boy Ismail, son of one Abdur Rahman, was killed while a house collapsed at char Aminul Haq village in Noakahli last night.