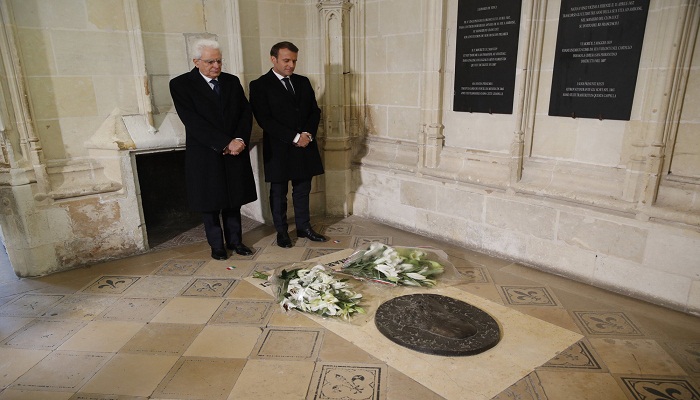 The presidents of France and Italy laid a wreath Thursday on the tomb of Leonardo da Vinci, who died in the French town of Amboise exactly 500 years ago.

The joint visit by Presidents Emmanuel Macron and Sergio Mattarella aimed to show their attachment to cultural sites uniting the two countries.

Leonardo’s Mona Lisa is considered by many to be the most famous, most visited and most valuable painting in the world. Here are five things to know about the Italian Renaissance master:

In 1516, Leonardo, 64, accepted an invitation from young French King Francis I to come to Amboise, in central France, where he lived in the Clos Luce castle.

He died on May 2, 1519 and was buried four days later in the chapel of Clos Luce, according to his wishes. But his remains went missing in 1811, when the monument was destroyed by the castle’s new owner.

His remains were eventually identified in 1863 during an archaeological dig and were buried inside the nearby Amboise castle, in the Saint Hubert chapel, which Macron and Mattarella visited Thursday.

Both heads of states headed to Clos Luce castle for lunch and then went to the nearby Chateau de Chambord, whose famous spiral staircases were likely inspired by Leonardo’s work.

Da Vinci experts are hoping to resolve a mystery around a tuft of hair purported to belong to the Renaissance master — and perhaps unlock the secret of his genius.

The lock of hair was recovered along with a ring during the 1863 searches for Leonardo’s tomb, according to historic documents presented Thursday at the opening of two new private museums in his birthplace, the Tuscan town of Vinci, dedicated to the artist’s legacy.

The documents indicate that the official commissioned to search for the tomb, Arsene Houssaye, kept two relics for himself: a lock of the master’s hair and a bronze ring found on Da Vinci’s finger.

Some scholars have expressed doubts about the relics, which were later acquired by an American collector. Museum officials say they plan to compare DNA from the hair with that of descendants of Da Vinci’s half-brother Domenico, with the hope of sequencing the master’s DNA.

The exhibitions in Vinci will run through Dec. 31.

The Mona Lisa was so precious to Leonardo that he never gave it to the person who commissioned it. While there are no written traces of his travel to France, it is believed that he carried the painting with him in a leather satchel when he left Rome. It took him two months to cross the Alps and arrive in Amboise.

Mystery remains about the exact fate of the painting following Leonardo’s death.

The Louvre Museum says the painting was acquired by King Francis I in 1518. During the 17th century, Mona Lisa’s presence is attested at the Fontainebleau castle, south of Paris, before King Louis XIV moved it to the Versailles palace. It was displayed to the public for the first time in 1798 at the Louvre.

ITALY’S SALVINI WANTS THE PAINTING BACK

Italy’s interior minister, Matteo Salvini, has joked several times about bringing the Mona Lisa back to Italy, picking up on a theme that started around the 2006 World Cup (which Italy won over France.)

He mentioned it during a press conference in Rome to announce events for the 500th anniversary of Da Vinci’s death — and he made the same joke in Paris following a visit with far-right leader Marine Le Pen.

“I’ll go now and take the Mona Lisa and bring it to Milan and everything is in order. No one will notice during the lunch break. We’ll make a blitz, load it on to the airplane and there you go,” he told journalists on April 5.

Salvini, Italy’s top law enforcement official, has repeatedly sparred with France over the issue of migrants and decades-old domestic terrorism cases. “We don’t need another international crisis,” he said during the March 13 press conference on Leonardo commemorations.

In 1986, American pop art master Andy Warhol imagined his own versions of Leonardo’s “Last Supper” in a series of art pieces displayed in Milan just before his death.