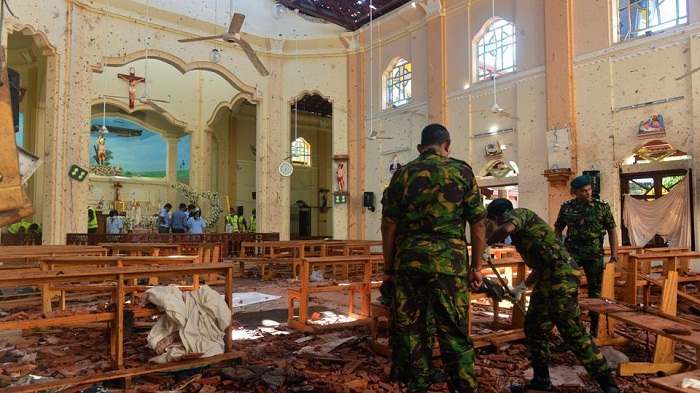 The chief of Sri Lanka’s army said some of the people who carried out the April 21 serial bombings in his country had travelled to regions such as Kashmir and Kerala in India to possibly be part of terrorism training activities, according to an interview with the BBC published online on Friday.

The comments by Lieutenant General Mahesh Senanayke is the first confirmation by a senior security official in either of the countries of the terrorists having travelled to India, a link that Indian security agencies have been pursuing since shortly after the attacks in the island nation.

“They had gone to India, travelling to Bangalore, Kashmir and Kerala state, (according to) information available with us,” Senanayke said.

Asked if he was aware of the purpose of those visits, the army commander replied: “It would have been for some sort of a training or to establish links with other organisations outside the country”.

Counter-terror agencies such as the National Investigation Agency have carried out raids in parts of Tamil Nadu and Kerala, where they have picked up several people for suspected links to the Islamic State – the Syria-based terror group that claimed responsibility for the attack.

According to Indian officials who have not to be named, at least two of the suicide bombers had travelled to India in 2017.

A Union home ministry official did not comment on the Sri Lanka Army chief’s comment. “Sri Lanka hasn’t shared any such information with us. Importantly, Sri Lankan security agencies themselves have ruled this out after investigation,” a senior official in the security establishment, who did not wanted to named, said. Till now, Indian investigators have not mentioned a Kashmir link to the Lankan bombers, though leads were still being followed.

One of the key suspects who is believed by Indian officials to have visited India is Islamic preacher Maulvi Zahran Bin Hashim – leader of Sri Lanka National Towheed Jama’at (NTJ) and the ringleader of Easter Sunday attackers.

Indian officials refused to share details about the purpose of Hashim’s visit or the people he was in touch with. Hashim, an official said, was initially associated with Tamil Nadu Towheed Jama’at (TNTJ) but the organisation was not found involved in any terror activities. He subsequently broke away from TNTJ to form his own – Sri Lanka National Towheed Jama’at (NTJ) and started preaching violent form of Islam in the island nation.