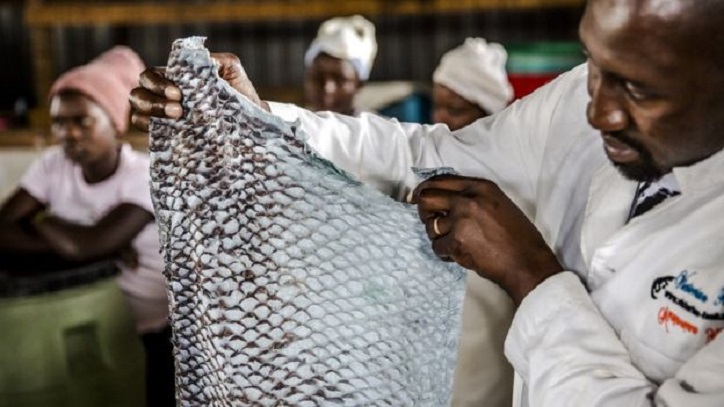 Steinunn Gunnsteinsdóttir admits that it took her family more than a few attempts to be able to make leather from fish skins.

"The first 200 times we just made smelly fish soups," she says.

Ms Gunnsteinsdóttir is the sales manager of Icelandic company Atlantic Leather, which owns the only fish tannery in Europe.

Overlooking a fjord on Iceland's remote north coast, since 1994 it has been processing the skins of salmon, perch, cod and wolffish.

The tanning process takes between three and four weeks, and 19 employees now produce 10,000 skins, or nearly a tonne, of fish leather a month.

"The fish smell disappears in the early stages, then it smells like any other leather," adds Ms Gunnsteinsdóttir, who is the daughter of the founders.

The company gets all its fish from sustainable stocks, via Icelandic, Norwegian and Faroe Island fishing fleets, and unlike the worst examples in the global cow leather industry its tanning process is as environmentally friendly as possible.

The operation runs off geothermal energy, which is prevalent in Iceland, and the firm has equipment that enables it to re-use every drop of water between eight and nine times in the production process.

Atlantic Leather also uses natural, non-polluting dyes. The price of its leather varies depending on the fish, but the salmon skins sell for $12 (£9) a square foot.

Now supplying top European fashion houses Jimmy Choo, Dior and Ferragamo, Ms Gunnsteinsdóttir says it is a misconception that fish leather must be delicate and easy to tear.

"This is because the fibres in fish skin criss-cross rather than just up and down... it makes it much more durable leather for products that have to be really strong like shoes, belts and bags."