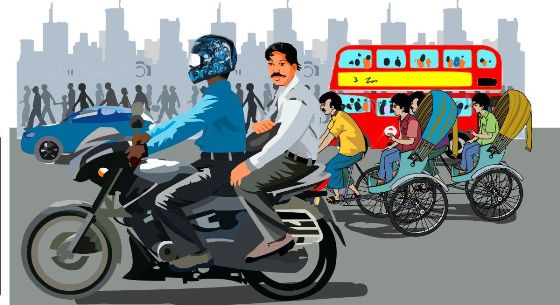 The immensely growing popularity of the motorcycle hailing services is brining new challenges for road safety due violation of traffic rules by the bikers and lack of accountability of the ride-sharing services and their drivers.

Passengers are being victimized by the ride-sharing services in many ways as ride-sharing companies have little or no control over their partners/drivers.

Nagging traffic congestion and lack of public transports have abnormally pushed up the use of bike-sharing service in the country’s major cities, including Dhaka.

Though these motorcycle ride-sharing services have provided some sorts of relief to the public transport crisis in the city, the number of road accidents in Dhaka has also increased.

Many users of the bike-sharing services alleged that most of the motorcycle drivers are unskilled. They do not have proper training to provide the services.

Inexperienced drivers, reckless driving by violating of traffic rules, low-quality helmets for pillion riders and fast driving to do more rides to get bonus from ride-sharing companies are the key reasons for accidents, they alleged.

Many drivers were providing fake addresses flouting rules while getting registered for offering ride-sharing services.

According to the drivers and apps authorities, only 30 to 60 minutes of indoor training are given before a driver/partner hit the street.

According to a Pathao customer care official: “At first we verify all the papers of the vehicles including driving license. After that, we have a 30 to 60-minute training for the drivers. Finally, we allow the driver to carry passenger.”

Pathao app has been downloaded more than 50 lakh times while more than 4 crore trips were made with the app, according to the Pathao website.

On April 25, Fahmida Haque Labannya, 24, a student of BRAC University was killed as a covered van hit her ridesharing motorcycle in the capital’s Sher-e-Bangla Nagar area.

Abdur Rashid, sub-inspector of Sher-e-Bangla Nagar Police Station, said Labannya was going to her university by the motorcycle of a ridesharing service. When she reached at the gate of National Institute of Cardiovascular Diseases, the covered van dashed the motorcycle from behind around 11:45 am.

The accident left the university student dead on the spot.

After the incident, many people have taken to the social media to raise concerns over the safety concerns with the riding services.

They alleged that apps-based ride-sharing companies are not monitoring their bikers’ activities as most of the bikers drive recklessly.

It was also alleged that many youths came to the capital from various parts of the country and started providing motorbike ride-sharing service as many ride-sharing companies are helping them to get a motorbike in easy instalment. This often causes accidents as most of the ‘migrated’ riders are not capable to drive in Dhaka.

Sajid, a university student said, “The driver’s helmet is safe but the helmets given to the passengers are mostly made of plastic.”

“Most of the cases the helmet has no ribbon,” he added.

In most cases of motorcycle accidents, the motorcyclists or co-riders get injuries in the head, neck or spinal cords which leave them either dead or paralysed for life, according to doctors.

“Some drivers are unskilled while some are drug addicts. While carrying female passengers, some bikers intentionally push break abruptly,” he said.

He also said the helmet kept for the passengers are also substandard.

The police officer said they have asked the ride-sharing companies to address these issues. “Otherwise, legal action will be taken against the companies,” he said.

Knowing the risks of accident, people are forced to use bikes to get mobility in time-bound life in urban areas.

According to the Accident Research Institute (ARI) of BUET, around 8 to 9 per cent of all road accidents are occurred with motorcycles. The number is higher as many of the road accidents caused by motorcycles remain unreported as they are considered as individual cases.

Kazi Md. Shifun Newaz, Assistant Professor of BUET, said “Motorcycle drivers are usually amateur drivers. As a result, they do not have an institution of education. The risk of a motorcycle accident is three times higher than other vehicles.”

“Accidents are often caused due to reckless driving with more than one rider. Biker and the pillion riders must have to wear helmets to avoid accidents,” he added.