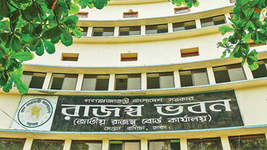 National Board of Revenue (NBR) Chairman Md Mosharraf Hussain Bhuiyan on Thursday said the new VAT law would be effective from the day of the budget announcement.

The NBR chairman said this while addressing a pre-budget meeting with the Economic Reporters Forum (ERF) at the NBR building in the city’s Segunbagicha area.

Mentioning that the highest VAT rate in the new law would remain 15 percent, Mosharraf said the finance minister has already fixed the new VAT rates after discussing with the businessmen, while the businessmen have also accepted the rates.

Mosharraf said that if the companies think that their rates are high, then they could enlist in the capital market for enjoying less corporate tax rate.