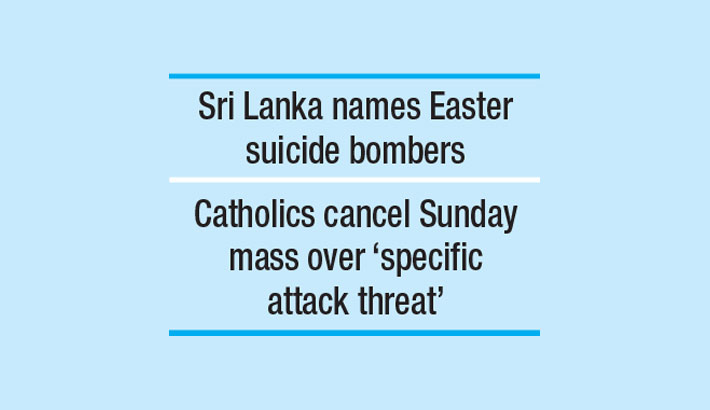 The normal stream of faithful and tourists has fallen to a trickle since the April 21 attacks on churches and hotels that killed more than 250 people.

Many of Sri Lanka’s 15 million Buddhists fear they too could become a jihadist target. Wild rumours of attacks fly around each day—building unease which observers say serves the cause of Buddhist radicals.

Nilman Ekanayake, a 29-year-old Sri Lankan on holiday from his job as a manufacturing manager in Britain, said Wednesday he has never seen Gangaramaya so empty.

“There is a lot of speculation at the moment,” he told AFP. “They have targeted a church, a place of worship. A Buddhist temple is another place of worship. It’s an unknown for the public.” “Going out in the streets in Colombo at around eight o’clock, it’s like three or four in the morning. There’s nobody out there and I’ve never experienced that in my lifetime.”

Pallegama Rathanasara, a monk at the temple, also highlighted the uncertainty.

“The intelligence services say the next attack will be on a Buddhist temple,” he claimed.

While the the main victims of the recent attacks were Christian, the Easter attacks have strengthened a minority of Buddhist extremists who want an authoritarian Buddhist state, political commentator Kusal Perera said.

“The ordinary Buddhists are made to feel that they are under threat,” Perera told AFP. “This is the way Buddhist extremists can remain relevant.

“What we are seeing is the creation of a fear psychosis among the Buddhists. The end result will be a militarised society,” he warned.

The government has come under criticism after it admitted that it had prior warnings about the suicide bomb attacks, which have been claimed by the Islamic State group.

Police spokesman Ruwan Gunasekera confirmed that two of the luxury hotels were bombed by two brothers from a wealthy Colombo family involved in spice exports.

The group of Islamists had used one bomber at each of the locations hit on Easter Sunday, except at Shangri-La hotel where there were two suicide explosions.

One of the Shangri-La bombers was Zahran Hashim, the leader of the local jihadist group responsible for the audacious attacks that were claimed by the Islamic State group.

Hashim headed the National Thowheeth Jama’ath (NTJ) which has since been banned. He attacked the Shangri-La in the company of fellow Islamist Ilham Ahmed Mohamed Ibrahim.

Ilham’s elder brother Inshaf Ahmed was the man who bombed the nearby Cinnamon Grand hotel.

The third hotel to be targeted, the Kingsbury, was bombed by a man identified as Mohamed Azzam Mubarak Mohamed. His wife was now in police custody, Gunasekera said.

On the other hand, Sri Lanka’s Catholic Church has cancelled plans to resume Sunday services following a “specific threat” of fresh bomb attacks against at least two places of worship, a spokesman said, reports AFP.

The archbishop of Colombo, Cardinal Malcolm Ranjith, had wanted to resume regular mass from May 5, but the new information made them put it off indefinitely, his spokesman told AFP Thursday.

“On the advice of the security forces, we have decided not to have Sunday masses in any of the churches,” the spokesman said. “There is a specific threat against two locations.”

The Church had planned to resume Sunday public services for the first time since the Easter Sunday attacks that killed 257 people.

Last Sunday the cardinal conducted a private memorial mass that was broadcast live on television after cancelling all public services.

On Tuesday, he said he was closely monitoring investigations into the April 21 suicide attacks against three churches and three luxury hotels and wanted to be sure of the security situation before returning to regular services.