Venezuela crisis: Maduro aides agreed he had to go, US say 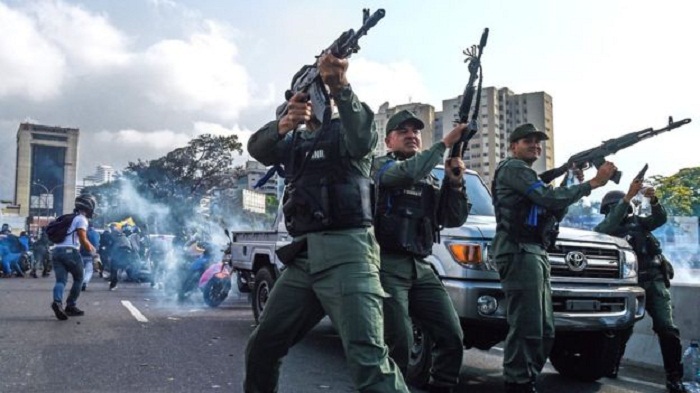 Three members of Venezuelan President Nicolás Maduro's inner circle agreed with the opposition that he "had to go" but then backtracked, US officials have said.

It comes after the opposition leader Juan Guaidó called on the military to help him end Mr Maduro's rule.

Protesters took to the streets in the capital Caracas in support on Tuesday.

But military leaders appeared to be standing behind Mr Maduro, accusing Mr Guaidó of an attempted coup.

US Secretary of State Mike Pompeo has also alleged the president had been prepared to leave the country on Tuesday and fly to Cuba but was talked down by Russia. He has offered no evidence of the claim.

"They had an airplane on the tarmac. He was ready to leave this morning, as we understand it. Russians indicated he should stay," Mr Pompeo told broadcaster CNN.

Sitting alongside military commanders, he said he would be victorious in the face of what he called a coup attempt backed by US imperialism.

Who were the officials?

US National Security Advisor John Bolton has alleged Venezuela's Defence Minister Vladimir Padrino was one of the men involved in three months of negotiations with the opposition.

However, Mr Padrino appeared on television surrounded by soldiers on Tuesday, asserting their continued loyalty to Mr Maduro.

Media caption"This is unstoppable," says Carlos Vecchio, Juan Guaido's envoy to the US

He said they had committed to "to achieve the peaceful transition of power from the Maduro clique" to Mr Guaidó, who the US, UK and a number of the other countries recognise as Venezuela's rightful leader.

"All agreed that Maduro had to go," Mr Bolton told reporters in Washington.

Mr Bolton offered no evidence that Mr Maduro's loyalists were preparing to abandon him. The assertions were later repeated by Elliott Abrams, the US envoy for Venezuela.

A power struggle between Mr Maduro and Mr Guaidó, who is leader of the opposition-held National Assembly, has been brewing since January.

Mr Guaidó declared himself as interim leader and has been recognised by dozens of countries but Mr Maduro has held on to power.

On Tuesday morning Mr Guaidó appeared in social media video alongside another opposition leader, Leopoldo López, who had been under house arrest since being found guilty of inciting violence during anti-government protests in 2014.

In it, he declared he was in the "final phase" of ending President Maduro's rule and announced he had the support of "brave soldiers" in Caracas.

"The National Armed Forces have taken the correct decision... they are guaranteed to be on the right side of history," he said.

However, the entire military did not appear to be backing Mr Guaidó during the course of the day.

The BBC's Guillermo Olmo, in Caracas, said Tuesday marked the most violent episode of the Venezuelan political crisis so far.

There were running clashes between Mr Guaidó's supporters and armed military vehicles. Protesters were also seen throwing rocks, but being repelled by tear gas and water cannon

Television cameras also caught the moment armoured vehicles drove into a crowd. It is unclear if there were any injuries in that incident.

Venezuela's health ministry said 69 people had been injured across the country.

At one point, Mr López, who leads the Popular Will party of which Mr Guaidó is a member, and his family took refuge in the Chilean diplomatic residence.

But on Tuesday evening, he left and moved to the Spanish embassy, according to a tweet from the Chilean Foreign Minister Roberto Ampuero.

Mr Ampuero said it was Mr López's "personal decision", because he and his wife Lilian Tintori are of Spanish descent.

A failure, or more to come?

Tuesday's events have definitely been dramatic. But it's not clear where it leaves Venezuela.

Juan Guaidó made a bold move by saying the armed forces were on his side early in the morning. And the fact that opposition politician Leopoldo López, who was under house arrest, stood beside him was also big surprise. Who had freed him and what did that say about the loyalties of the armed forces?

But as the day went on, little clarity emerged - who exactly is behind this so-called uprising? For Juan Guaidó to achieve the regime change he's promised, he needs the generals at the top on his side. So far though, at least publicly, they remain loyal to Mr Maduro.

The situation on the ground is still confusing - but the confidence that the opposition had at the beginning of the day looks like it's waning.