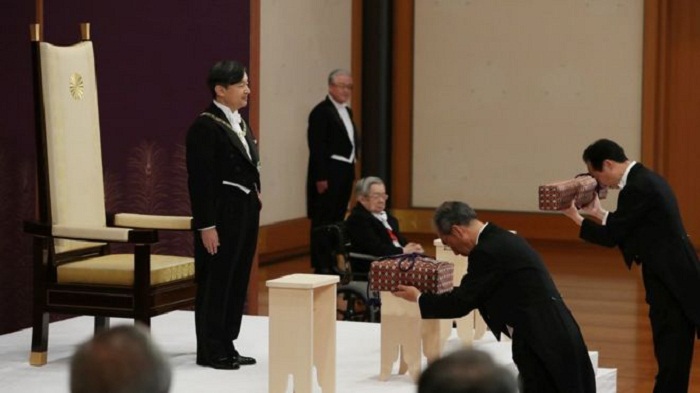 Naruhito officially became emperor at midnight, but in a simple and deeply symbolic ceremony on Wednesday he inherited the Imperial Treasures, formalising his ascension.

The emperor in Japan holds no political power but serves as a national symbol.

His father, Emperor Emeritus Akihito, 85, who chose to abdicate due to his age and failing health, stepped down on Tuesday, making him the first Japanese leader to do so in over 200 years.

What happened at the ceremony?

Female royals are not allowed to be there so Empress Masako, Emperor Naruhito's wife, was not present.

Naruhito, 59, was presented with two objects - replicas of a sword and a gem - which are passed down through generations of emperors and are seen as the symbols of imperial power.

There is one additional object, a mirror, and together the three make up the Imperial Treasures or Regalia.

However, the mirror - considered the most precious of the treasures - which is believed to be kept at the Ise Grand Shrine in Mie prefecture, never leaves its resting place.

"In 1989 when Akihito [ascended the throne], he spoke about social welfare and peace," Ken Ruoff, director at the Centre for Japanese Studies at Portland State University, told the BBC.

These were goals that Emperor Akihito worked towards during his Heisei era, and his interactions with those stricken by disease or disaster endeared him to many Japanese.

"I think from Naruhito's first words, we'll have a good sense of what the new emperor's plans will be. I think it will set the tone [of the new era]," Professor Ruoff said.

Emperor Akihito took up the role of a diplomat during his reign, becoming an unofficial ambassador for Japan and travelling extensively to other countries, - something Naruhito is expected to continue.

What do we know about the new emperor?

Naruhito is Japan's 126th emperor. He attended Oxford University, and became crown prince at the age of 28.

Empress Masako later told reporters that she had accepted Naruhito's proposal after he said: "You might have fears and worries about joining the imperial household. But I will protect you for my entire life."

Masako, who reportedly suffers from a stress disorder, had admitted in December that she felt "insecure" about becoming empress, but pledged to do her best to serve the people of Japan.

Masako was educated at Harvard and Oxford, and had a promising career as a diplomat before her marriage.

The couple's only child, Princess Aiko, was born in 2001. However, Japan's current law restricts females from inheriting the throne so she is not her father's heir.

Naruhito's brother Prince Fumihito will be next in line to the throne, followed by the new emperor's nephew, 12-year-old Prince Hisahito.

Why is the Japanese monarchy important?

It's the oldest continuing hereditary monarchy in the world. Legends date it back to about 600 BC.

In fact, Japanese emperors used to be seen as gods, but the country's wartime emperor Hirohito - Naruhito's grandfather - publicly renounced his divinity at the end of World War Two, as part of Japan's surrender.

The role was redefined by Emperor Akihito, who helped repair the damage to Japan's reputation after the war.

Akihito will now be known as "Joko", which means "grand emperor", and by the English title "Emperor Emeritus", while Michiko will be "Empress Emerita".