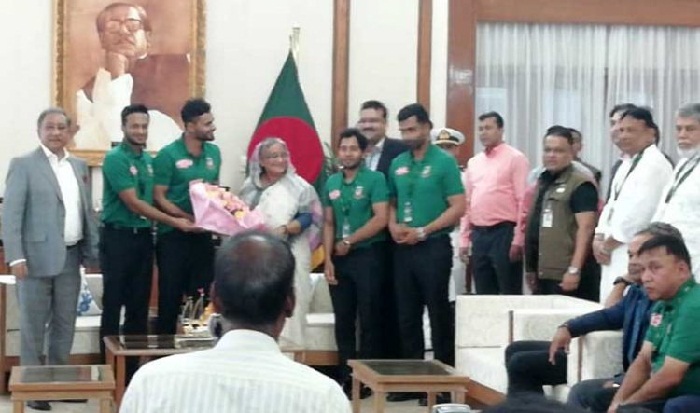 Prime Minsiter Sheikh Hasina on Tuesday afternoon encourged Bangladesh Cricket Team members that paid a visit at Ganabhaban in capital before they set for Dublin on May 1 to join a tri-nation series and later take part in ICC Cricket World Cup.

Sheikh Hasina said, “You have to believe that we must win. Don’t lose your confidence if you lose a game. In cricket, confidence is a key factor. You have to handle the tough situations in cool head.”

Sheikh Hasina directed Bangladesh Cricket Board (BCB) coach and high officials not to create extra pressure on the players.

“Don’t put extra pressure on them. Let them play their natural cricket. If they play with self-confident, win will be ours,” primer said to the officials of BCB.

She also forbade Bangladeshi batsmen not to hit boundaries in 3 or 4 balls at a stress.

Nazmul Hasan Papon, president of BCB requested Sheikh Hasina to visit London to enjoy matches. She expressed her willingness to do so if possible.

Bangladeshi cricketers and BCB officials took their lunch at Ganabhaban after the meeting.

Bangladesh national cricket team will fly to Ireland to play a tri-nation series with Ireland and West Indies on May 1.

After the series, they will travel to England to join the ICC cricket world cup.