An algorithm wipes clean the criminal pasts of thousands 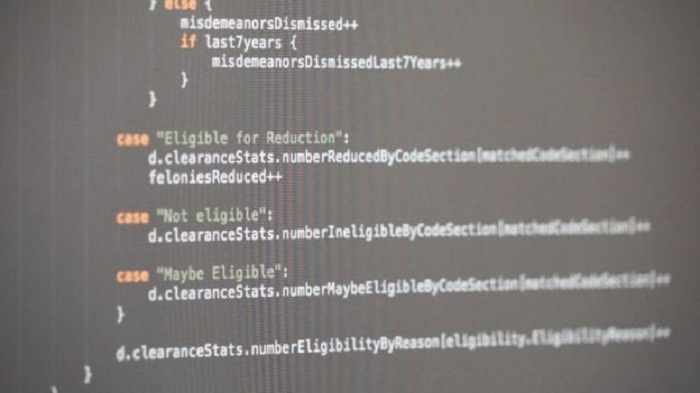 This month, a judge in California cleared thousands of criminal records with one stroke of his pen. He did it thanks to a ground-breaking new algorithm that reduces a process that took months to mere minutes. The programmers behind it say: we’re just getting started solving America’s urgent problems.

Piero Salazar is sitting at a wooden table, swamped by paperwork. His anxious family looks on.

He’s one of around 50 or so people who have come to this community centre in San Fernando, near Los Angeles, to take part in an “expungement clinic” - a free service for those looking to get their criminal records removed or reduced. A team of lawyers, working pro bono, sit behind a long counter and call people forward when their number is up.

On this Saturday morning, most here, Mr Salazar included, are seeking to have cannabis-related convictions expunged under California’s Proposition 64, a measure passed in 2016 that made marijuana legal in the state. As part of the new law, those with prior convictions could now seek to have them struck off their record.

“It makes me feel better to know I’m not a felon,” says Mr Salazar, filling in his forms.

Monique Herrera is here with her young son.

“I want to just get this off. Get clean. Do what I have to do and have a better life.”

It’s estimated there are a million people in California with a cannabis-related charge in their past, an invisible shackle that blocks opportunities to get housing, jobs and thousands of other things most of us would regard as necessities.

Yet, fewer than 3% of people thought to qualify have sought to have their records cleared since the passing of the new law.

It’s thought many are overwhelmed or intimidated by the complex expungement process. The clinic may only come to town once every few months, if at all. Others simply don’t know expungement is possible.

But now, work to automate this entire ordeal has begun - with remarkable results.

“I formed the opinion that this is really our responsibility,” said George Gascon, San Francisco’s district attorney.

Though almost 10,000 people in the city were predicted to be eligible for expungement, just 23 had come forward.

So in January 2018, Mr Gascon pledged to proactively review past marijuana cases - but there was a snag.

“When we started to do this by hand, we recognised very rapidly that this was going to take a long time.”

He enlisted Code For America, a non-profit organisation that works on creating Silicon Valley-esque solutions to problems within the many antiquated systems powering the US government.

The group had made Clear My Record, a tool that can analyse text in court files, using character recognition to decipher scanned documents.

It discards any record involving a violent crime, as such records do not qualify. For those that remain, the tool automatically fills out the necessary paperwork. In other words, the algorithm replaced the process being done manually at the expungement clinics.

Working with San Francisco’s raw data, Code For America was able to identify 8,132 eligible criminal records in a matter of minutes - in addition to the 1,230 found manually already. They dated as far back as 1975, the year in which the city started digitising its files.

And so it was, on 3 April, that San Francisco judge Samuel K Feng signed them all off - reopening life opportunities for thousands of people.

For cases it wasn’t sure about, the algorithm would refer up to a human.

“It isn’t an algorithm doing something in isolation,” explained Evonne Silva, who helps lead Code For America’s work with the criminal justice system.

“It is actually very much a partnership with the government - the policy, the technology and the process combined.”

For Mr Gascon, who is standing stand down this year in order to care for his ailing 90-year-old mother, the move will form a core part of his legacy.

“We created this war on drugs,” he said.

“We - the criminal justice system and society in general - harmed many communities throughout the years. I felt that we had an obligation to right that wrong.”