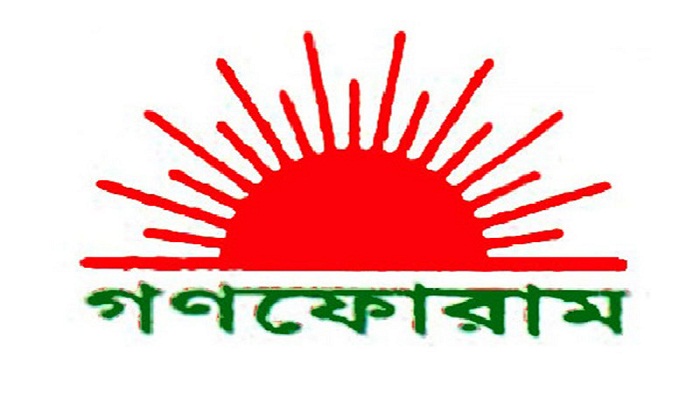 Though the party has got its representative to parliament 27 years after its formation, Gano Forum is likely to face a split due to internal feud among its leaders over party leadership and oath taking by its MP Mokabbir Khan.

Gano Forum’s internal conflict came to the spotlight as a group of party leaders, including its general secretary Mostafa Mohsin Montu, boycotted the party’s special council held in the city on Friday while some others voiced their resentment at the council session as Mokabbir joined it.

Due to the infighting, no fresh committee of the party was formed in the council held after eight years while the party delegates entrusted Dr Kamal with the responsibility to form a committee and run the party and reorganise it in consultation with senior leaders.

A leader, close to Dr Kamal Hossain, told that their president may form an ad-hoc committee in the early next month instead of making a full-fledged committee to run the party and prepare it for another council within a year overhauling it at the grassroots.

In the face of the growing anger, Mokabbir was also served with a show-cause notice on Saturday, signed by Montu, for taking oath violating the party decision.

Party insiders said a misunderstanding developed between party president Dr Kamal Hossain and its general secretary and some other leaders over taking oath by its two MPs --Sultan Mohammad Mansur and Mokabbir Khan.

They said a group of party leaders, led by Montu and Gano Forum executive president Subrata Chowdhury, was deadly against taking oath by the two MPs while others loyal to Dr Kamal were in favour of sending their MPs to parliament.

A party presidium member said the Montu-led group believes that Mansur and Mokabbir took oath as Dr Kamal gave them the green signal to do that.

The problem first brewed when Mansur took oath on March 7 claiming that Dr Kamal gave him consent to be sworn in. However, the tension got defused after Mansur was sacked from the party. But it remerged when Mokabbir took oath on April 2 as Dr Kamal was neither making his position clear nor taking action against him.

A number of Gano Forum leaders said there is a conflict between Montu and a group of party leaders, lea by party another executive committee member Mofizur Rahman Kamal, over the party leadership and organisational issues.

A leader of the Mofizur-led group said Montu created a division in the party as he always gives priority to the leaders loyal to him.

Contacted, Mofizur Rahman said many party leaders are not happy with Montu over some internal issues. “Party men are unhappy with him as he used BNP chief Khaleda Zia’s photo in his poster during the national election.”

Another party leader said they are not with Mofizur, but they want a change in the party general secretary post.

He said a group of party leaders are in favour of making Subrata Chowdhury its new general secretary.

However, another leader, close to Dr Kamal, said their president wants to make Reza Kibria, who joined Gano Forum,  before the last national election, its general secretary.

He also wared that the division in the party will deepen if Reza Kibria is made general secretary.

Contacted, Subrata Chowdhury claimed that there is no conflict among their party leaders, except some misunderstanding over the Mokabbir Khan issue. “We’ve sent a show-cause letter to Mokabbir and action will be taken against him based on his reply. I hope the misunderstanding will be over soon.”

Mokabbir said he received the show-cause letter on Sunday afternoon. “I haven’t gone through it yet.”

He said party men should not be angry over his participation in the council as he is a presidium and founding member of it.

Mokabbir said he does not have any misunderstanding with Montu. “I’ve a very close relation with him and there’s no reason to involve in any conflict with him. I think he’s my close friend and will remain so.”

Jubo Gano Forum president Kazi Habib said they boycotted the council as Mokabbir joined it. “Montu Bhai and we have no conflict with Dr Kamal. But we want Dr Kamal to make his position over Mokabbir clear. Mokabbir needs to be sacked as per the aspiration of the party’s 99 percent leaders and activists.”

He also said 80 percent party leaders and activists will become either inactive or think otherwise if Mokabbir is not expelled from the party.

Party training affairs secretary Rafiqul Islam Pathik said it is painful that Kamal Hossain is doing ‘dual politics’ over Mokabbir’s issue. “I came out of the council and boycotted it in protest against Mokabbir’s presence at the council.”

He said the party may face a split if Dr Kamal does not expel Mokabbir and form a new committee with competent and dedicated leaders. “Dr Kamal also should sit with the aggrieved party leaders to resolve the misunderstanding.”