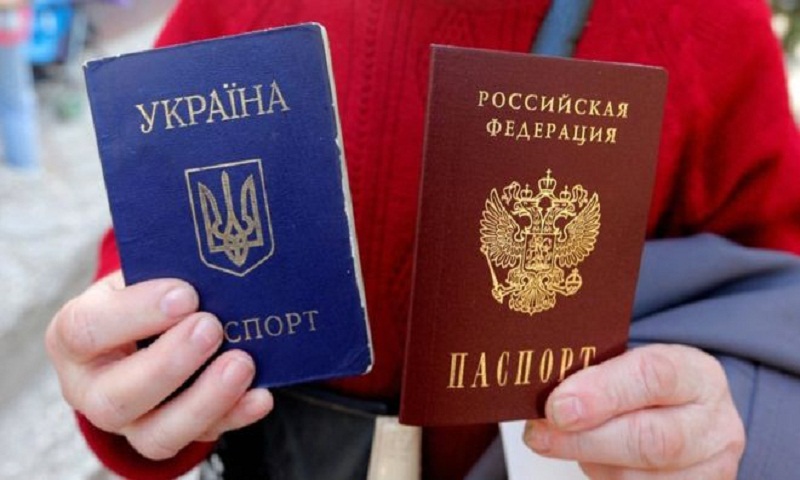 Russian President Vladimir Putin says he is considering extending a scheme that makes it easier for Ukrainians to obtain Russian citizenship.

This week he signed a decree that offers people in eastern Ukraine's separatist territories Russian passports in less than three months.

Now he says he may extend the scheme to the whole of Ukraine.

Relations between the two countries were further strained this week when Ukraine's parliament passed a law making the use of the Ukrainian language mandatory for public sector workers.

Russia says the move discriminates against Russian speakers in Ukraine - for many, particularly in eastern regions, Russian is still the first language.

The new tensions add to the challenges facing Ukraine's President-elect, Volodymyr Zelensky, who ousted Petro Poroshenko at last Sunday's election by a landslide.

What did Putin say exactly?

On Wednesday, the Russian leader announced the passport scheme would be applied to Donetsk and Luhansk, the self-declared republics seized by Russian-backed separatists in 2014 after Russia annexed Crimea from Ukraine.

Crimea itself was incorporated into Russia, giving its inhabitants the same citizenship rights as those in Russia.

Mr Putin said people living in Donetsk and Luhansk who considered themselves Russian were entitled to Russian passports.

Mr Putin said earlier that people living in the rebel territories were "completely deprived of civil rights" and could not "move normally" or "realise their most elementary needs".

On Saturday, he announced: "We are considering providing a simplified procedure [of obtaining Russian citizenship] to all the residents of Ukraine."

What is the new language law?

Under the new law:

-Ukrainian must be used for signs, letters and in adverts

-Local TV channels are set a target of 90% Ukrainian content

-Ukrainian should be used for all official duties of public servants ranging from the president to judges, doctors and bank workers

-Mr Zelensky, whose own first language is Russian, defended the new legislation, which his opponent Petro Poroshenko had championed.