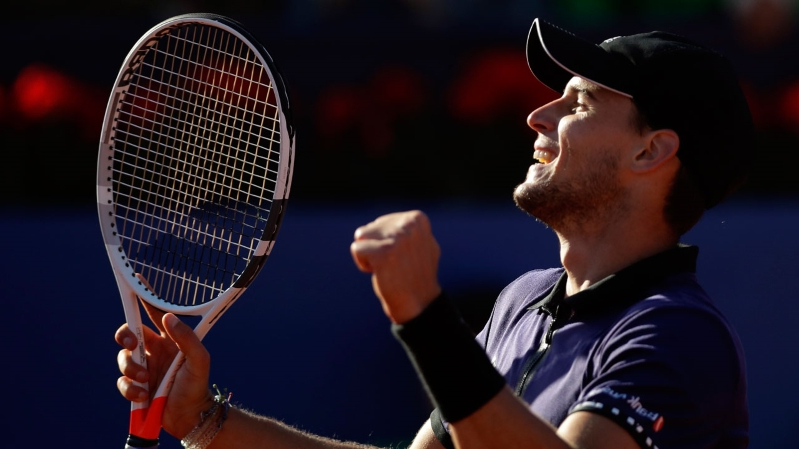 For the second week in a row, Rafael Nadal has fallen in the semifinals of a clay-court tournament he has dominated for more than a decade.

Dominic Thiem defeated Nadal 6-4, 6-4 in the Barcelona Open on Saturday, becoming the first player other than Novak Djokovic to defeat the Spaniard on clay four times.

The loss for Nadal came one week after he was beaten by Fabio Fognini in Monte Carlo.

Nadal was seeking to add to his 11 titles at both events.

Now, the 17-time Grand Slam champion will be looking to recover his normally unstoppable form on clay before next month's French Open, which he has also won 11 times.

While Nadal called his loss at Monte Carlo "one of his worst matches on clay," he said Saturday's loss to Thiem was one he could learn from.

"There are losses that help you, and this was one of them," said Nadal, who had been aiming for a fourth consecutive title in Barcelona.

"Considering the way I played, it has been quite a while since I felt this good on clay," he said. "Of my last eight matches this is the first one where I have left that I am playing at the level I need to be at, to be able to play relaxed and with the necessary energy.

"Thiem played a great match and I was in it. I was competitive, and I think that from here on I will be even better."

Thiem will try to win his second title of the year on Sunday in a final against Daniil Medvedev, who upset fourth-seeded Kei Nishikori 6-4, 3-6, 7-5.

The fifth-ranked Thiem won his first title of the season by defeating Roger Federer in the Indian Wells final in March. This will be his first final on clay since last year's French Open, where he lost to Nadal.

Thiem lost the Barcelona final to Nadal two years ago, but the Austrian has beaten Nadal on clay in each of the last three seasons.

Only two other players have beaten Nadal on clay three times — Fognini and Gaston Gaudio.

The second-ranked Nadal had never lost in the semifinals or finals in Barcelona. He had won 18 straight here going back to a third-round defeat to Fognini in 2015.

Thiem has yet to lose a set this week, and he was in control early on against Nadal, putting pressure on the Spaniard's serve from the start. He broke Nadal in the fifth game of the first set and had four break opportunities immediately after that before Nadal recovered to hold.

The one break ended up being enough for Thiem in the first set, and he moved ahead of the Spaniard again at 2-2 in the second set. He was down 0-40 while serving for the match, but came back to close out the victory at the Rafa Nadal main court.

"I'm always super proud if I beat him because he's the best player ever on this surface," Thiem said. "We always had great matches in the past, and also today's was very good. I was more lucky today."

Nishikori, the winner in Barcelona in 2014 and 2015, was broken twice in the final set against Medvedev, including in the final game of the match.

It was a tour-best 25th win this year for the 14th-ranked Medvedev, who was coming off a semifinal appearance in Monte Carlo. It will be his first-ever clay court final.