The leader board of Cricket World Cup 2019 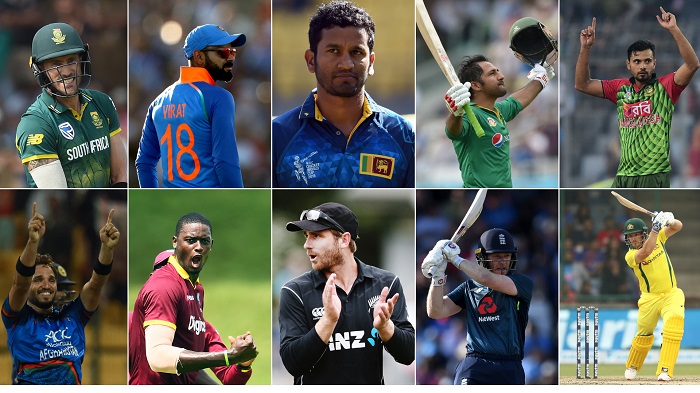 Ten teams will compete in the much-anticipated ICC Men's Cricket World Cup 2019 in England and Wales, starting on 30 May, and each will depend a lot on their captains.

Out of the 10, three captains – Eoin Morgan, Jason Holder and Mashrafe Mortaza – have led their side in the previous edition, while the other seven are set to make their World Cup captaincy debuts. We take a look at their past records in charge in ODIs, and how they can influence their respective sides.

Not only will Gulbadin Naib be making his World Cup debut as captain, but he is also set to lead in an international game for the first time. Naib was recently named the new Afghanistan ODI captain, taking over from Asghar Afghan, as the Afghanistan Cricket Board adopted a split captaincy system, featuring a different leader for each of the three formats. With no past leadership experience, how Naib fares in his new role remains to be seen. His credentials as a player: 807 runs in 52 ODIs to go alongside 40 wickets.

In October 2018, Aaron Finch was named Australia's ODI captain. He has since led the side in 18 ODIs and won 10 of them, for a win percentage of almost 56. Barring one against South Africa, all those wins have come this year. Finch struggled with the bat for a good chunk of his captaincy period, before regaining form in the series against Pakistan in March, when he scored two centuries and as many fifties.

One of the most experienced members of the side, Mashrafe Mortaza will be leading Bangladesh for the second time at the World Cup. Under his leadership in the 2015 edition, the team finished fourth in Group A, above England, Afghanistan and Scotland, before losing in the quarter-final to India. That had been Bangladesh's first entry into the knockouts of a World Cup, and it arrived via a nervy, famous 15-run win over England. Mortaza has been a successful captain for Bangladesh, winning 40 of the 73 games he has led in.

Eoin Morgan has been at the helm, overseeing England's remarkable transformation into a formidable one-day outfit, since their heartbreaking exit in the group stage at the 2015 edition. Under Morgan's leadership, England have ascended to the top of the pile and are currently No.1 in the MRF Tyres ICC Men's ODI Team Rankings. They head into this year's tournament as one of the favourites, and are eyeing their maiden World Cup crown, at home. Morgan is captaining what is arguably the strongest England team to ever compete in a World Cup. Since that 2015 exit, Morgan has led England to 50 wins in 76 ODIs.

As is the case with Morgan, Virat Kohli carries extra baggage as captain of one of the favourites to win the tournament. Kohli's leadership has developed with time, and he arrives at the tournament with a staggering win percentage of 73.88 in ODIs. Out of the 68 games India have played under Kohli, they have won 49. Kohli has past experience of leading at a world event, having captained India during their run to the final of the ICC Champions Trophy 2017, which they lost to Pakistan at Lord's. He is now set to lead in his maiden World Cup, and will be one of the most-watched players.

The current New Zealand skipper was part of the team that finished as runners-up in 2015, after making the final for the first time. While Williamson grew under the then captain Brendon McCullum, he brings a vastly different approach to the captaincy himself. Calm and composed, Williamson brings laser-sharp focus and unquestionable intent, both to his batting and to his captaincy. Williamson will be the lynchpin of the New Zealand line-up, as its most successful batsman. Concurrently, he has also enjoyed success as a leader, boasting a win percentage of 53.96.

The captain during their run to the ICC Champions Trophy title in 2017, Sarfaraz Ahmed will look to lead Pakistan to the World Cup trophy at the same site of their Champions Trophy triumph. He certainly possesses the track record to make it happen, having won 21 out of the 35 ODIs he has captained in, for a win percentage of 61.76. Sarfaraz will play several important roles for Pakistan during the World Cup, as captain, as a middle-order batsman, and as a wicket-keeper.

Easily the most successful captain on this list, Faf du Plessis has enjoyed terrific success as leader: out of the 30 ODIs in which he has captained, South Africa have lost only five, translating to a brilliant win percentage of 83.33. Since the start of 2018, South Africa have lost only one bilateral series, and have won five. A stylish middle-order batsman, du Plessis averages 46.54 in ODIs, making him a vital top-order asset. However, he is also flexible enough to be used in the lower middle-order.

Sri Lanka will be without the services of some of their more regular and experienced players, including Niroshan Dickwella, Dinesh Chandimal, Upul Tharanga and Akila Dananjaya. Dimuth Karunaratne, who last played an ODI in March 2015, at the previous World Cup, was named captain for this year's tournament. He recently led his side to a historic 2-0 sweep of South Africa earlier this year - Sri Lanka's maiden Test series win in the country – but is yet to make his captaincy debut in ODIs. Karunaratne has some way to go as a batsman – he's got the technique and knows how to score runs, but has only 190 runs from 17 games, at an average of under 16.

West Indies won the first two editions of the World Cup, in 1975 and 1979, and their current captain takes inspiration from the man who led them to those triumphs: Clive Lloyd. Holder recently opened up about his relationship with the West Indies legend and is keen on repeating history this year at Lord's, the venue of the side's last World Cup win. The 27-year-old all-rounder is going to be the youngest captain at this year's tournament, and with a good mix of experience and youth in his side, is focused on repeating history. Although West Indies haven't won a bilateral ODI series since 2014, they recently drew a five-match series against tournament hosts England at home, and will take the confidence from that going into the tournament.