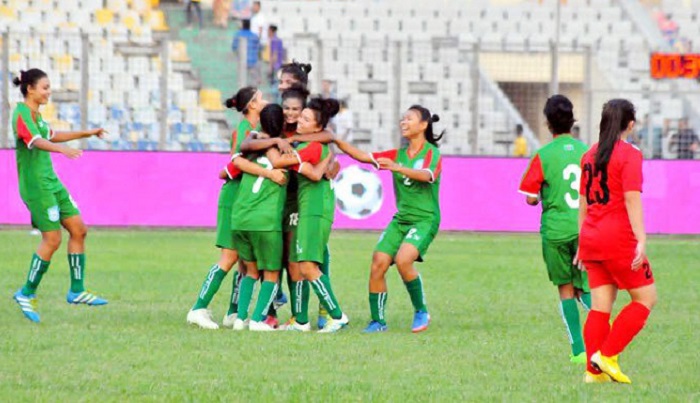 Bangladesh beat Kyrgyzstan by 2-1 goals in the Group B title-deciding match of Bangamata U-19 Women’s International Gold Cup on Friday.

Sanzida netted the first goal at 30th second while Krishna doubled it at 60th minute, at 69th minute Kyrgyzstan lowered the score 2-1.

Bangladesh dominated the game from the start. They dealt a heavy blow to the visitors when right winger Sanjida Akhter netted the first goal for Bangladesh in the first minute of the game (1-0).

A mistake by Kyrgyzstan goalie Tolonova Aichurek helped the hosts record the fastest goal of the tournament.

Bangladesh dominated the second half as well. In the 58th minute, Krishna Rani Sarker doubled the margin (2-0) after Aichurek failed to ward off the ball.

The forward buried the ball in net by a close range header from the goal mouth melee, utilising a direct shot by Sanjida Akhter.

But the touring side got a success in the 69th minute of the game. Defender Akhmatkulova Zarina netted the lone goal for her side (2-1).

Laos will take on Tajikistan on Saturday (April 27) in their last Group A match to decide the group champions. The match will start at 8:30pm to accommodate the final of the football event in the Bangabandhu Inter University Sports Championship. The prime minister is expected to attend the game.