‘Fab Five’ keeps Tigers ahead of other teams in World Cup 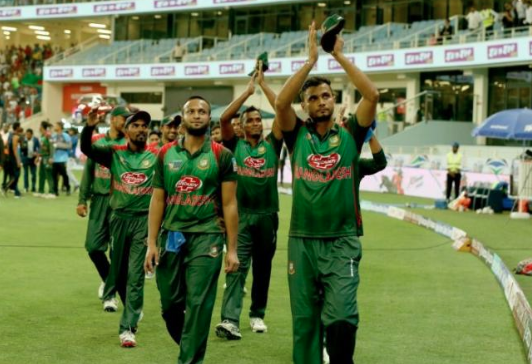 Bangladesh might be ranked No. 7 at the ICC ODI cricket rankings at the moment but the experience of five senior players will keep Bangladesh in advantageous position in the upcoming ICC Cricket World Cup.

The five senior players-Mashrafe Bin Mortaza, Shakib Al Hasan, Tamim Iqbal, Mushfiqur Rahim and Mahmudullah-who are popularly termed as ‘Fabulous Five’ or ‘Fab Five’ are ahead of any players in the world as far the experience of ODI cricket is concerned.

Apart from Mahmudullah, the other four players of Bangladesh will be playing their fourth World Cup-an experience that not so many players of the other teams have in this World Cup.

It could have been fifth World Cup for Mashrafe, had he not missed the 2011 World Cup at home den due to his unfortunate injury. Though many believed that Mashrafe could be fit by the time when the World Cup began, the then Bangladesh coach Jamie Siddons wasn’t willing to take risk with him.

Nonetheless amongst all players who played in this World Cup none have the experience of playing 2003 World Cup, except Mashrafe and West Indies’s Chris Gayle. Thereby he is unique in this sense.

Tamim, Shakib and Mushfiqur on the other hand are going to play their fourth straight World Cup, having first appeared in the showcase event in 2007 and announced their arrival in the very first match against India. All three scored half-century in that match to fire alongside Mashrafe Bin Mortaza who claimed 4-38 as Bangladesh produced one of the biggest upset, beating India by five wickets-a defeat that also led India’s exit from the group phase that World Cup.

However for Mahmudullah, this will be the third straight World Cup.There are also some players like Soumya Sarkar, Sabbir Rahman who is going to play their second World Cup. So according to team’s junior player Mohammad Saifuddin, experience-wise Bangladesh are ahead other teams, a thing which can put them in advantageous state psychologically.

“If you think overall, our team is not as strong as India or England,” said Saifuddin. “But we have five players who have the experience of playing
over 200 ODIs. Experience really matters in this kind of tournament.”

“Apart from them, we have some experienced players too. I think as far as the experience is concerned, we are ahead of the other teams.”

Saifuddin also think the young players who are in the squad would have to support the senior players adequately to earn the expected result as
Bangladesh aim to seal the semifinal spot in the cricket’s biggest extravaganza.

“Our team is consisted with the blend of experience and youth. There are some exciting young players in the team but like me, Soumya Sarkar and others would have to come all guns blazing and reduce the burden on the senior players. If we can fire around them, we certainly can beat any team in the tournament,” he concluded.