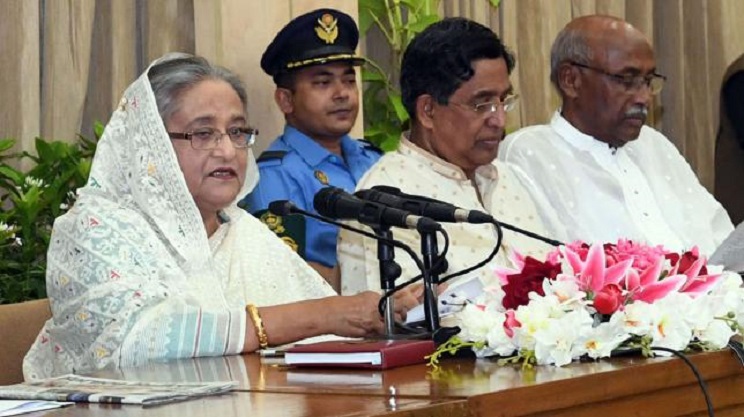 Prime Minister Sheikh Hasina on Friday said it is not her policy to divide any party or do anything that leads a party to a split.

"To divide a party or to do anything (harmful) to any party isn't my policy. We usually get many proposals...I'm very much rigid about it," she said while responding to a question at a press conference at her official residence Ganobhaban.

The press conference was convened to brief the media about the outcomes of the official visit of the Prime Minister to Brunei from April 21 to 23 last.

Sheikh Hasina said those who formed parties under the purview of agencies they know their path very well. "They sought their shelter there...it's not a matter to divide a party... why should we go for that? " she questioned.

Hasina, also the chief of the ruling party, firmly said Awami League has enough manpower and followers, and it does not need any more from other parties.

"AL itself is enough to ensure the welfare of people," she said.

The Prime Minister said every party has its own characteristics and they are very much independent to take any decision regarding their own party as the country has multiparty democratic system.

"BNP Is a political party; whatever it does it is its own political decision. Any other party cannot impose their decisions on them," she said.

Regarding the oath-taking move by a BNP MP defying the party decision, Hasina said there is no pressure from the government on the elected MPs to take oath.

Hasina mentioned that the BNP MP after taking their oath said he would speak for their own party in Parliament.

Responding to a question about the much-talked-about parole of Khaleda Zia, the Prime Minister said for availing of parole one has to apply first. "So far, no one has applied for that," she added.