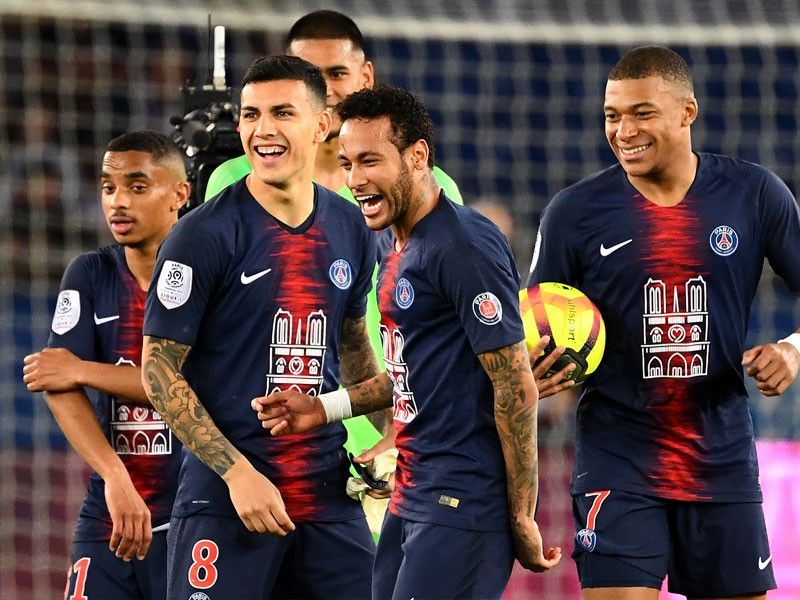 Paris Saint-Germain's pursuit of a fifth successive French Cup title will be bolstered by the return of Neymar and Edinson Cavani from long-term injuries for Saturday's showdown with Rennes at the Stade de France.

Brazil star Neymar made his first appearance since January 23 as a second-half substitute in Sunday's 3-1 win over Monaco as PSG celebrated clinching a sixth Ligue 1 crown in seven years.

Cavani also returned to action, coming on for the final 17 minutes, as PSG's famed front three -- which has accounted for 78 goals this season -- were reunited after months apart.

Coach Thomas Tuchel admitted he "worried" for PSG's prospects after they blew a third chance to wrap up the league at Nantes last week, but the German struck a more positive note after watching his team belatedly seal the title.

"Our objective is clear: to win the double. We have to win on Saturday," said Tuchel, who is also set to welcome back Angel Di Maria after six weeks out.

"The French Cup is very important to us, and we hope to clinch it and leave nothing for the others," added goalkeeper Alphonse Areola, his thoughts echoed by defender Marquinhos.

"A title is always about honour and pride. We all know what our goal for the season is, and that's to win a maximum number of titles for the club," said the Brazilian.

Anything less than a domestic double for PSG, attempting to lift the French Cup for a record 13th time, would cast further gloom over the Qatari-backed club after their latest European failure.

But Gianluigi Buffon expects Rennes, who enjoyed their best ever run on the continent this year by reaching the Europa League last 16, to present a tricky test.

PSG beat Rennes 3-1 at Roazhon Park and won 4-1 at the Parc des Princes, but Rennes will look for the ultimate revenge as they chase a first French Cup in 48 years.

"The fact that it's a one-off match, a final, brings the two sides closer together, the gap isn't as wide as it can be over 38 matches," Buffon told PSG TV.

Rennes won the trophy in 1965 and 1971, but the Brittany club have painful memories of their past two finals -- finishing as runners-up to neighbours Guingamp in both 2009 and 2014.

"We have a bit more experience now than we did during our first games in Europe but it's still a totally different game," said Rennes captain Benjamin Andre.

"Lifting the trophy at the Stade de France would be great. We know the expectations at Rennes. We'll obviously give it our all like we do in each match."