Surrogacy: Is the sale of a baby ever OK? 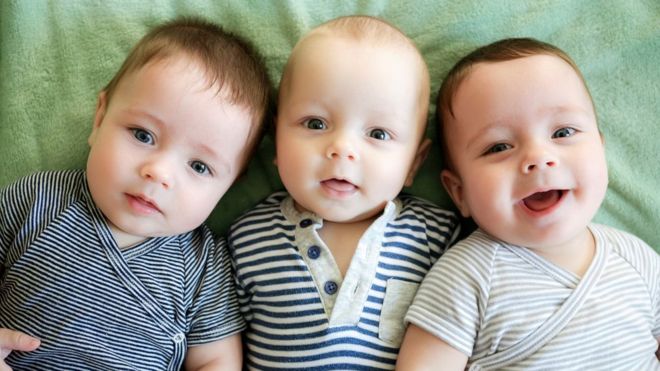 Surrogacy is not a new phenomenon. For thousands of years, women have nominated others to give birth on their behalf.

However, technological advances such as IVF, softening of cultural attitudes and the trend for having children later have fuelled a recent boom in surrogacy.

In the past two decades, it has become a global phenomenon. There are no precise figures on how many children are involved but as far back as 2012 the industry around surrogacy was worth an estimated $6bn (£4.7bn) a year.

In the UK alone, the number of parental orders made following a surrogate birth has tripled from 121 in 2011 to 368 in 2018. The true number of surrogacy arrangements may be even higher, as there is no obligation to seek such an order.

The procedure can bring with it great advantages, especially for those who can't have children naturally, by allowing individuals and couples to have their "own" child, without going through a long and restrictive adoption process.

In the majority of cases, these procedures go smoothly. But surrogacy's soaring popularity has come at a human cost and stories of potential mistreatment have hit the headlines several times in recent years.

For example, the case of baby Gammy shocked the world, when it was alleged the commissioning parents had intentionally left Gammy, who has Down's syndrome, in Thailand, while taking his non-disabled twin sister Pipah home to Australia.

A court later ruled he had not been abandoned, although it emerged the commissioning father had previous convictions for child sex offences, playing into wider concerns regarding the welfare of surrogate children.

On top of child welfare concerns, there are also examples of surrogate mothers being exploited by agents and kept in inhumane conditions.

Financially and socially vulnerable women can be targets for surrogacy recruitment, attracted by the sums of money on offer. A surrogate in Ukraine, for example, can earn up to $20,000 (£15,507) - more than eight times the average yearly income.

However, there have been reports of poor treatment of surrogate mothers, with some agencies refusing to pay surrogates if they do not obey strict requirements or if they miscarry.

Exploitation concerns have led to many countries shutting down their previously booming surrogacy industries, while last year the UN warned that "commercial surrogacy... usually amounts to the sale of children".

The rise of 'health tourism'

One problem is that legislation around surrogacy varies hugely from country to country, shaped by history, culture and social values.

In some places, like Germany and France, surrogacy is seen as violating the dignity of women, using them as the means to someone else's end. Therefore, the practice is completely forbidden.

Others, like the UK, view surrogacy as a gift from one woman to another, and allow it on an "altruistic", expenses-only basis.

Others still, such as California, Russia and Ukraine, permit commercial surrogacy, viewing it as an expression of a woman's autonomy to engage in surrogacy of their own free will.

These huge inconsistencies have led to surrogacy becoming a popular form of "health tourism".

If their own country does not allow surrogacy, or places restrictions on it, prospective parents can simply travel to somewhere with more relaxed laws, or more problematically, a country where the practice is completely unregulated.

Recent years have seen would-be parents flocking in large numbers to countries like India, Thailand, Cambodia and Nepal, only for these countries to shut their clinics to foreigners following concerns about exploitation of their citizens.

But as one surrogacy hotspot gets shut down, another pops up in its place.

There are clearly serious ethical issues stemming from the potential exploitation of women in poorer countries, and the dangers of treating children like commodities. On top of this, health tourism can also create significant legal dilemmas.

While some countries recognise the surrogate as the legal parent, others allocate parenthood to the commissioning parents from the moment of birth - a clash of laws meaning children can be left stateless, with neither country recognising them as citizens.

Is an international agreement possible?

Intergovernmental body the Hague Conference on Private International Law is currently looking into the possibility of forming internationally agreed rules for authorities to recognise the parenthood of children born abroad through surrogacy, and set out consistent rules.

However, it may be difficult to reach international agreement, due to the widely differing attitudes towards surrogacy.

Countries that ban or restrict the practice would be unlikely to sign up to something that allows commercial surrogacy, and vice versa.

This means authorities are left in a very difficult situation: the global surrogacy market has sprung up due to the inconsistency of laws around the world, but it is precisely because of these differences that they are unable to regulate the practice effectively.

Surrogacy can provide the joy of a longed-for child, but at the same time it opens the door for the exploitation of the most vulnerable.

As surrogacy gains in popularity, these legal and ethical dilemmas will only become more pressing. Pandora's Box has been opened and the law has failed to respond.