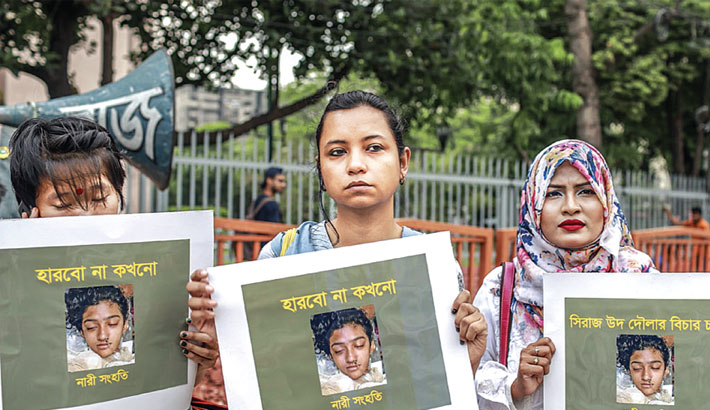 “My mother was waiting for me beside the school playground while I was sexually harassed by a wicked teacher inside my classroom. Back then I was studying in a kindergarten school. Often he touched me inappropriately dodging the eyes of other students of the class. I was shy and afraid to share my experience with others. I was shy as I thought what my peers would think of me if I told them the truth. I was afraid because I didn’t know what would happen if my parents stopped sending me to the school. As a child I was weak and vulnerable. I didn’t know what sexual harassment was and how to handle such situation at that age. Many years have gone but still I cannot express in words how terrified I was and how I felt when he used to touch me. I can clearly remember even that teacher’s presence in the school premises would make me feel uncomfortable” - this was how Nazia Sultana (not her real name), branch manager of a private bank, shared her childhood experience with this writer. Thousands of such incidents are happening every day in our educational institutions and just like Nazia Sultana many of our girls are still going through similar experiences.

Very few of them protest against such sexual harassment and share their experience with their guardians as our conservative social structure and stereotypical mentality don’t allow our girls to free themselves from prejudice and gather courage to stand strongly against these misconducts until their backs pin against the wall. And even if any girl protests while facing any incident of sexual harassment and files a complaint against the abuser, our society backs the perpetrator and the concerned authorities ask improper questions to the very girl. We cannot provide security to her and consequently the infuriated offender gets the courage to attack the victim. We utterly fail in ensuring justice for her. The recent inhumane murder of Nusrat Jahan Rafi, an Alim examinee who was brutally set on fire on the roof of Sonagazi Fazil Madrasa for filling a case of sexual harassment against her principal Sirajuddaula, substantiates this fact. In fear of such awful consequences even after being harassed by a group of insensible criminals many girls don’t seek justice. As a result the wrongdoers roam around scot-free. Why are such shameful and disastrous incidents happening in our country? Why are we failing to curb such violence and harassment in the educational institutions? It’s the right time to look for the answers of these questions.

Filing complaint for sexual harassment largely depends on the socio-economic and cultural context in our country. As our overall social context doesn’t encourage girls to raise voice against any misconduct, harassing girls inside the educational institutions have been going on for quite a long time. Such incidents have been happening for two reasons. The first reason is that we are showing a kind of negligence in ensuring a safe environment in our educational institutions for our girls and secondly, we are failing to ensure proper and exemplary punishment for the criminals who sexually harass them.

On May 14, 2009, the High Court provided a ground-breaking guideline for the authorities to prevent sexual harassment of women following a Public Interest Litigation filed by the Bangladesh National Women Lawyers Association (BNWLA). The judgment defined sexual harassment and laid down directives in the form of recommendations to protect women from sexual harassment in the workplace and educational institutions. It was also clarified by the HC that its guidelines will be treated as law until a law relating to prevention of sexual harassment is put in place. The definition of sexual harassment not only included unwelcome physical contact but also verbal remarks and non-verbal gestures. The judgment instructed to sanction Anti-Harassment Committees (AHC) in every educational institution. It also mentioned that the AHC members should be mostly women, with at least two members from outside the organisation, preferably individuals with deep knowledge of gender issues and sexual abuse.

But it is staggering that most of the educational institutions did not form any Anti-Harassment Committees even after the directives. And in the educational institutions where such committees were formed it remained non-functional. There was no awareness campaign from the part of management committees, governing bodies or the senate which was one of the vital instructions of the HC guideline. Thus the students couldn’t know about the existence of such committees in their campus premises. The most shocking truth is neither the Directorate of Primary Education, Directorate of Secondary and Higher Education and University Grants Commission nor the Ministry of Primary and Mass Education and Ministry of Education took any initiative to monitor that whether the directives of the High Court was implemented or not. However, it seems that finally the government has understood the importance of HC guidelines as the authorities of all educational institutions under the Directorate of Secondary and Higher Education have been asked to form five-member committees for preventing sexual harassment on April 18. Unfortunately when the government and the educational institutions don’t take a milestone directive of the High Court seriously and fail to consider sexual harassment as an issue, then what could our girls do if they become a victim of such harassment? Due to this sort of indifferent attitude of the responsible authorities abusers dare to continue their notorious activities.

Educational institutions are supposed to play a vital role in a student’s life by teaching them moral and ethical lessons. And these are the places where they should feel safe after their house. If students become the victims of sexual harassment by the teachers or the staff of their educational institutions, then what kind of moral and ethical lessons will they learn from there?

Bangladesh’s education system is often appreciated by the global education experts for gradual rise in the enrolment rate of girls in the educational institutions. Being a liberal nation we expect that our girls will get success in every aspect of their lives. And it will happen only when they will get proper education. If we cannot ensure a safe campus for them, the dream of building a progressive Bangladesh will gradually fade away. Certainly we don’t want our dream to be shattered into pieces.