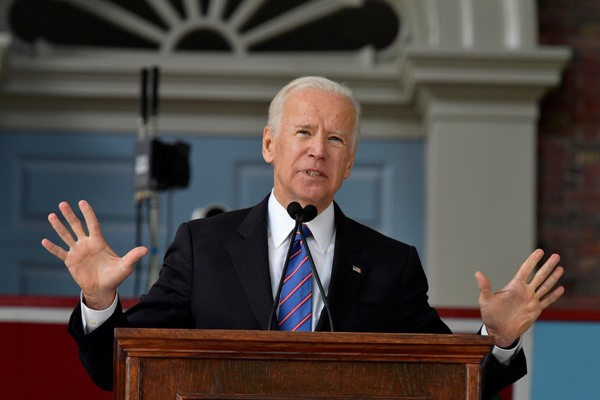 Former US Vice-President Joe Biden has declared a presidential bid, putting an end to months of speculation.

In a video announcement, Mr Biden warned that the "core values of the nation... our very democracy, everything that has made America America, is at stake".

The 76-year-old enters a crowded race for the 2020 Democratic nomination.

He is up against 19 other hopefuls, including Senators Elizabeth Warren, Kamala Harris, and Bernie Sanders.

In his announcement, Mr Biden recalled President Donald Trump's much-criticised response to the deadly Charlottesville white nationalist riots of 2017, saying the US was in a "battle for the soul of this nation".

"I believe history will look back on four years of this president and all he embraces as an aberrant moment in time," he said. "But if we give Donald Trump eight years in the White House, he will forever and fundamentally alter the character of this nation, who we are, and I cannot stand by and watch that happen."

Mr Biden is the most experienced of the Democratic candidates. A six-term senator, he served as President Barack Obama's deputy for two terms and ran twice unsuccessfully for president - in 1988 and 2008.

He was tipped to run again in 2016, but ruled himself out after the death of his 46-year-old son, Beau Biden, from a brain tumour.

Media captionJoe Biden: Will it be third time lucky in 2020?

Since his stint as vice-president, Mr Biden has enjoyed relative popularity among Democrats. On some issues, such as same-sex marriage, he was ahead of Mr Obama.

His popularity is reflected in opinion polls - he has consistently led every national poll of the Democratic primary tracked by the website RealClearPolitics. The sheer weight of his experience sets him apart from many of the younger 2020 Democratic hopefuls, and widespread national popularity and name recognition make him an immediate front-runner.

Mr Biden is also betting on having the strongest appeal of the Democratic candidates across America's Midwest, where many low-income voters have abandoned the party in recent years in favour of Mr Trump.

But the former vice-president also carries political baggage that the liberal wing of his party sees as problematic - including support for the Iraq war, opposition to efforts to improve racial integration, and controversy over his 1991 handling of sexual harassment allegations against Supreme Court nominee Clarence Thomas.