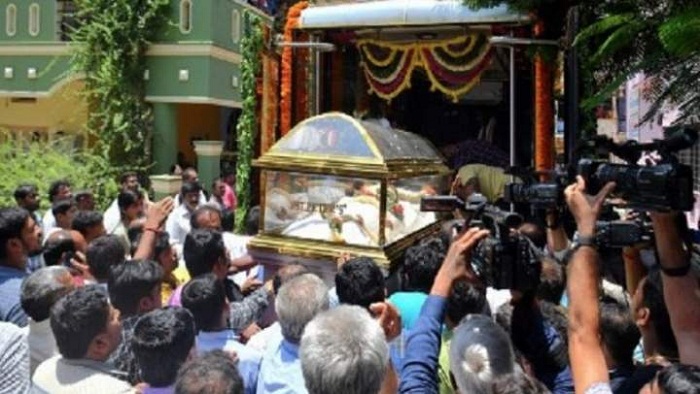 The mortal remains of five people from Karnataka, killed in the massive Easter Sunday bombings in Sri Lanka, were brought to their homes here in the early hours of Wednesday and late last night amid a pall of gloom.

Karnataka Home minister M B Patil received the mortal remains at the airport, which were later sent to their residences.

Hundreds of JD(S) workers and several Congress leaders also paid their last respects to the departed.

While 10 persons from Karnataka have been confirmed dead, at least seven of them are said to be JD(S) workers.

A holiday in Sri Lanka after a gruelling campaign in the Lok Sabha polls snuffed out the lives of the JD(S) workers when the blast took place very close to the dining table as they sat for breakfast at the Shangri-La hotel in Colombo, one of the major targets of the deadliest terror attacks in the island in recent times.

The bodies of Ramesh, Adakamaranahalli Mare Gowda and Harokyatanahalli Puttaraju will be brought to the city on Wednesday, officials said last night, adding that the deaths of Narayan Chandrashekhar and Remurai Tulasi Ram have also been confirmed, but details are not available.

The officials said Purushottam Reddy, who is injured, is also being shifted to the city for further treatment.

Seven suicide bombers carried out a series of devastating blasts that tore through churches and luxury hotels in Sri Lanka on Easter Sunday, in the country's worst terror attack.

The toll in the bomb attacks has risen to 359, police in Colombo said Wednesday.