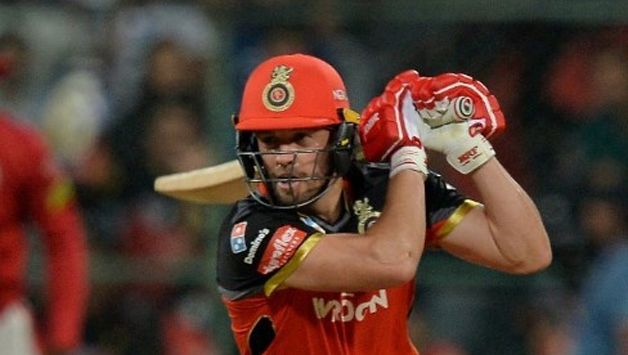 Royal Challengers Bangalore rode AB de Villiers' half century to record their third successive win on the trot with a 17-run victory over Kings XI Punjab to keep their chances alive, in an IPL game in Bengaluru on Wednesday.

Mayank Agarwal (35)and Rahul combined for a 59-run second wicket stand while David Miller (24) and Pooran joined hands for a 68-run partnership.

The result saw RCB lift themselves off the foot of the table while Kings XI remained fifth.

Earlier, de Villiers was scoring at run-a-ball till he was on 25, but from the 15th over onwards the South Africa legend changed gears to plunder his next 57 runs off just 19 deliveries as RCB scored 64 runs in the last three overs.

Playing yet another must-win game, RCB were reduced to 81/4 inside nine overs but de Villiers held fort from one end.

Skipper Virat Kohli (13) was the first to go, slicing Shami to Mandeep Singh at cover.

Parthi Patel played well for his 24-ball 43 (4x7, 6x2) before Murugan Ashwin removed him. Moeen Ali (4) was dismissed by Ravichandran Ashwin (1/15) who was the pick of the bowlers, not conceding a single boundary in his four overs.

However, he lacked support from the other end as de Villiers used all his experience and class to guide RCB to an imposing total.