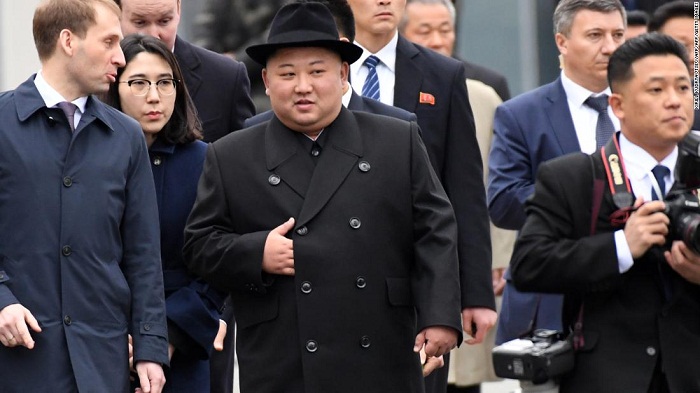 They are due to meet on Russky island near the city of Vladivostok in Russia's far east on Thursday morning.

Russia says they will discuss the Korean peninsula's "nuclear problem" but Mr Kim is also said to be seeking support after talks with the US failed.

But the summit - their second - ended without agreement.

Mr Kim arrived by train in Vladivostok on Wednesday for what will be his first ever talks with the Russian president.

Mr Kim was entertained by a brass band before he got inside a car flanked by bodyguards who - in now familiar scenes - jogged alongside the vehicle as it departed.

"I arrived in Russia bearing the warm feelings of our people, and as I already said, I hope this visit will be successful and useful," Mr Kim told Russian TV earlier, after crossing the border at Khasan.

"I hope that during the talks with respected President Putin, I will be able to discuss in a concrete manner issues relating to the settlement of the situation on the Korean peninsula, and to the development of our bilateral relations."

What do we know about the summit?

Russian and North Korean national flags are already in place on Russky island, where the leaders are expected to meet on a university campus.

According to the Russian presidential spokesman Dmitry Peskov, the Kremlin believes the six-party talks on North Korea, which are currently stalled, are the only efficient way of addressing the issue of nuclear weapons on the Korean peninsula.

Those talks, which began in 2003, involve the two Koreas as well as China, Japan, Russia and the US.

"There are no other efficient international mechanisms at the moment," Mr Peskov told reporters on Wednesday.

"But, on the other hand, efforts are being made by other countries. Here all efforts merit support as long as they really aim at de-nuclearisation and resolving the problem of the two Koreas."

What do both sides want?

This visit is being widely viewed as an opportunity for North Korea to show it has powerful allies following the breakdown of nuclear talks with the US earlier this year, the BBC's Laura Bicker says.

The country has blamed US Secretary of State Mike Pompeo for the collapse of the Hanoi summit in February.

Earlier this month North Korea demanded that Mr Pompeo be removed from nuclear talks, accusing him of "talking nonsense" and asking for someone "more careful" to replace him.

The summit is also an opportunity for Pyongyang to show that its economic future does not depend solely on the US, our correspondent adds.

Mr Kim may also try to put pressure on Moscow to ease sanctions.

Analysts believe this summit is a chance for Russia to show that it is an important player on the Korean peninsula.

President Putin has been eager to meet the North Korean leader for quite some time. Yet amid the two Trump-Kim summits, the Kremlin has been somewhat sidelined.

Russia, like the US and China, is uncomfortable with North Korea being a nuclear state.

How close are Russia and North Korea?

During the Cold War, the Soviet Union (of which Russia is the main successor state) maintained close military and trade links with its communist ally, North Korea, for ideological and strategic reasons.

After the Soviet Union collapsed in 1991, trade links with post-communist Russia shrank and North Korea leaned towards China as its main ally.

Under President Putin, Russia recovered economically and in 2014 he wrote off most of North Korea's Soviet-era debt in a major goodwill gesture.

While it is arguable how much leverage Russia has with the North today, the communist state still regards it as one of the least hostile foreign powers.