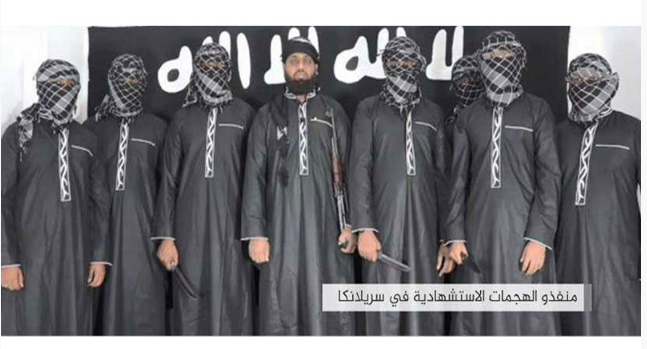 Hours after the Islamic State claimed responsibility for the blasts in Sri Lanka on Sunday that killed 321 people, the terror outfit released a photo of eight suicide bombers involved in the attacks, according to security sources.

The faces of seven attackers in the photo are covered while the eighth one, who is believed to be the ring leader, is without a mask.
Translation of the statement by security sources identified the attackers as Abu Ubayda, Abu al-Mukhtar, Abu Khalil, Abu Hamza, Abu al-Bara'a, Abu Muhammad and Abu Abdullah and their respective targets, a Firstpost report said.

Individual photos of some of the attackers also surfaced online on Islamic State forums.

In a statement, the Amaq News Agency said that "the executors of the attack that targeted citizens of coalition states and Christians in Sri Lanka two days ago were with the group".

According to PTI, in the statement Abu Hamza detonated his vest in the St Anthony's Church in Colombo, Abu Khalil blew himself up in the St Sebastian's Church in Negombo and Abu Muhammad in the Zion Church. The rest of the attackers targeted hotels.

The statement also claimed that around 1,000 people were killed or wounded in the blasts.

"The detail given in #ISIS' communique (attackers' names, where each of them attacked) shows that the group had a hand in the attack - the degree to which still remains to be seen. The group's delay in claiming is also an unanswered variable," SITE Intelligence Group Director Rita Katz tweeted, according to PTI.

Addressing an emergency session of Parliament, State Minister of Defence Ruwan Wijewardene said the "preliminary investigations have revealed that what happened in Sri Lanka was in retaliation for the attack against Muslims in Christchurch".

A series of devastating blasts targeted three churches and luxury hotels in Sri Lanka on Easter Sunday, killing 321 people and wounding 500 others, including Indians, in the country's worst terror attack. Nine Indian were killed in the blasts.

Sri Lanka’s probe agencies earlier suspected that a local Islamist extremist group National Tawheed Jamath (NTJ) plotted the attacks. "All suicide bombers involved in the blasts are believed to be Sri Lankan nationals," said Government's spokesman Rajitha Senaratne, who is also the Health Minister. 40 arrests were made in the case.

Now the video of bayah too #ColomboTerrorAttack #IslamicState #ISIS pic.twitter.com/tdG1i0SXaT