Modi gets 'candid' with Bollywood star 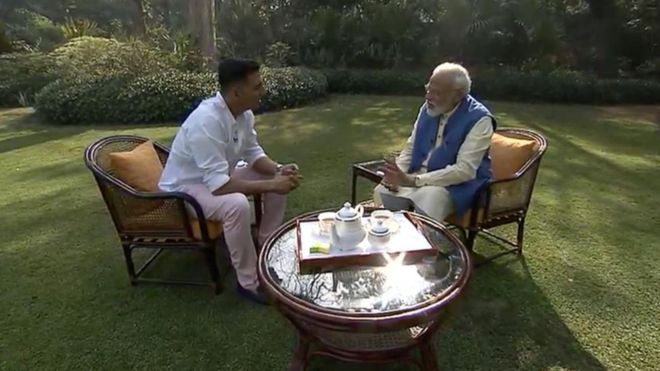 India has entered full election mode: voting began on 11 April, and the final ballot will be cast more than five weeks later on 19 May. Every day, the BBC will be bringing you all the latest updates on the twists and turns of the world's largest democracy.

Indian Prime Minister Narendra Modi sat down with Bollywood star Akshay Kumar for a "candid" interview, where the two discussed everything - except politics.

It's unclear when the interview actually took place but it aired on the ANI television channel on Wednesday. It was filmed at the prime minister's residence in Delhi.

The "completely non-political" - as Kumar put it - conversation has led to jokes on Twitter and #ModiwthAskhay is one of the top trends in India. 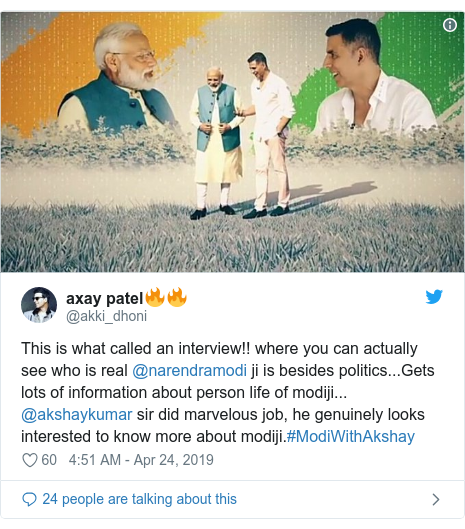 It's surprising because Mr Modi is known to avoid spontaneous interactions with the media. Televised interviews have been rare; and he has not held a single press conference in his five years as prime minister.

The casual tone aside, the interview was not really freewheeling because Kumar steered clear of anything remotely political or controversial.

We learnt a few new things about the otherwise reticent Mr Modi - he "enjoys" watching memes on himself; former US president Barack Obama repeatedly advised him to sleep longer; his very own remedy for a cold involves fasting for two days and putting mustard oil in his nostrils; and West Bengal chief minister and arch rival Mamata Banerjee sends him sweets and kurtas every year.

He also said he had never aspired to be prime minister; instead he wanted to join the army and "serve the nation".

One user commented on how Mr Modi appeared to have narrated his biography to Kumar considering the Election Commission had held back the release of a biopic on him during the election.

Modi is, of course, hugely popular so there were also those who enjoyed the interview.