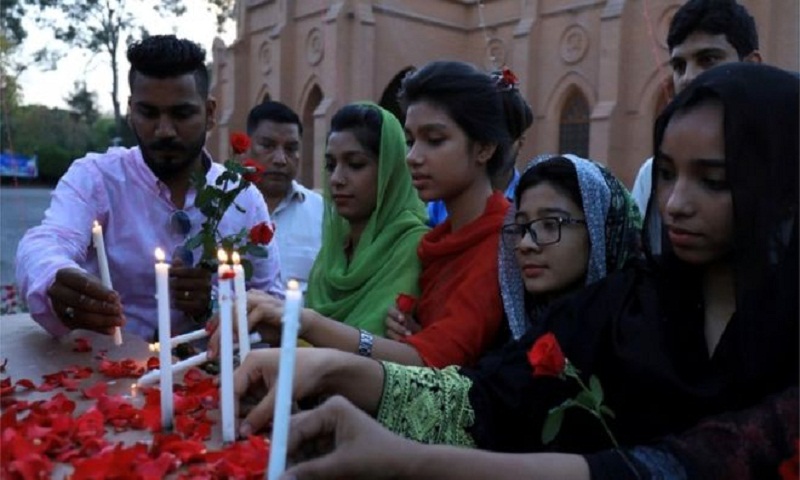 Sri Lanka is in a state of shock and confusion, trying to understand how a little-known Islamist group may have unleashed the wave of co-ordinated suicide bombings that resulted in the Easter Sunday carnage - the worst since the end of the civil war a decade ago.

The South Asian island nation has experience of such attacks - suicide bombers were used by Tamil Tiger rebels during the civil war. But the ruthlessness of the new atrocities has stunned the nation anew.

"There was an international network without which these attacks could not have succeeded," he told reporters on Monday.

That might go some way to explaining how a group that has been blamed for promoting hate speech may now have been able to scale up its capacity so monumentally.

On Tuesday, however, the Islamic State (IS) group said its militants had carried out the attacks. It published a video of eight men the group claimed were behind the attacks.

The IS claim should be treated cautiously. It is not clear whether these men were trained by the group or simply inspired by IS ideology.

The manner in which NTJ was identified was circuitous. The prime minister said there had been warnings made to officials that hadn't been shared with the cabinet. He said only the president would get such briefings, even though it is not clear if he personally did in this instance.

This is not an insignificant statement from a prime minister who was at loggerheads with the president for much of the past year. Many are drawing a conclusion about how political discord can have serious consequences - as well as undermining trust in the messages being put out.

If the suicide bombers were local Sri Lankan Muslims, as stated by the government, then it is a colossal failure by the intelligence agencies. Information is also now emerging in the US media that the Sri Lankan government may also have had warnings from US and Indian intelligence about a possible threat.

"Our understanding is that [the warning] was correctly circulated among security and police," Shiral Lakthilaka, a senior adviser to President Maithripala Sirisena, said.

The Sri Lankan president, who oversees security forces, has now set up a committee to find out what went wrong.

Sri Lankan intelligence was credited with foiling several suicide attacks by the Tamil Tiger rebels at the height of the civil war and for penetrating a well-knit and ruthless Tamil Tiger organisation.

While this is clearly a security and political failure, there are also questions about the nature of communal strife in Sri Lanka's more recent history. During the civil war, Muslims were also targeted by Tamil Tiger rebels and suffered at their hands.

One of the worst incidents was in the town of Digana in central Sri Lanka where one person died when a Sinhalese mob attacked Muslim shops and mosques in March last year.

"After Digana quite a few Muslims lost faith in the government to provide them security. Some of them got the idea that they can defend themselves," says Hilmy Ahamed, vice-president of the Sri Lanka Muslim Council.

The attacks and what the youths perceived as the lack of action by the government may have led some of them towards groups like NTJ.

Some of the radicals were blamed for damaging Buddhist statues in recent years and their leader was arrested last year for offending religious sentiments. He later apologised for offending the sentiments of the Buddhist Sinhalese.

Now it is widely believed a new group emerged a few years ago under the leadership of Zaharan Hashim, a radical Muslim preacher from eastern Sri Lanka.

Mr Hashim posted several videos on social media purportedly promoting hatred against non-Muslims. Most of his videos are in the Tamil language. His teachings are said to have attracted several Muslim youths.

"This man was preaching hate with lots of YouTube videos on social media posts. Some of us reported him to the national intelligence services. Once about three years ago and once in January this year," says Mr Ahamed.

He added that security services did not take any action against Mr Hashim. Reports say the preacher was one of the suicide bombers though it's yet to be confirmed.

Muslim community leaders say a few youths went to Syria to join IS, and some of them were killed in fighting there.

It's important not to overstate this, though, and a former senior military officer Maj Gen (Retired) GA Chandrasiri says "we have very cordial relationship with the Muslims. Most Muslims are not with these people. They are peace loving people".

There are no reports so far of a high number of jihadists returning to Sri Lanka. But even if a select few jihadists are angry with the majority, why were Christians targeted?

In the complex cocktail of Sri Lanka's religious and ethnic tensions, Christians are almost unique for not perpetrating any kind of violence on behalf of their community. After all, it is a religion that crosses ethnic lines.

I covered the Sri Lankan civil war for years and reported on many Tamil Tiger suicide attacks. It took years for the group to be able to learn to detonate such devices.

So it is intriguing that a lesser-known Islamist group, with a few home-grown radicals, could carry out six - some say even seven - suicide attacks with such pinpoint precision and devastation. None of them failed.

Even though connections with global jihadist groups are unclear, the choice of major luxury hotels and Christians as a target - in addition to the sophistication of the operation - makes it plausible that local radicalism has come under the influence of global jihadist networks. It would be a tried and tested pattern in global attacks.

During the Sri Lankan civil war foreign tourists were spared and attacks on outsiders were rare. In the latest bombings, many foreigners were killed and this has raised the spectre of links with al-Qaeda or IS.

"For this type of operation you need lots of assistance from outside. You need finances, training and technique for this kind of work. You can't do these things alone. May be there was some help from outside," Gen Chandrasiri said.

Violence is not new to Sri Lanka. It went through turbulent times during a left-wing insurrection in the 1970s followed by a nearly three-decade bloody war with the Tamil Tiger rebels. Tens of thousands of people were killed.

But the ruthlessness and sophistication of the latest atrocities indicate that it will be challenge for the Sri Lankan security forces to deal with those behind the bombings. The last thing the Sri Lankan public wants is more violence and recrimination.