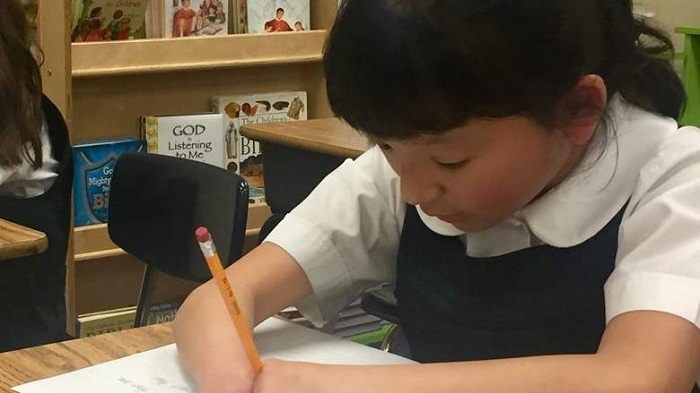 A 10-year-old schoolgirl from Maryland, US, who was born without hands won a national handwriting competition. A third-grade student, Sara Hinesley who has never worn prosthetic went on to win the 2019 Nicholas Maxim award for her cursive handwriting.

To write, Hinesley grips her pencil between her arms, focusing on the shapes of letters and said that writing in cursive feels like creating artwork. "I like the way the letters are formed. It's kind of like art," Hinesley was quoted as saying in The Washington Post.

She is the first student from her school in Frederick, Maryland, to have won the award which is given annually to two students with special needs, one for print writing and the other for script. But Hinesley, who paints, draws and sculpts clay, does not understand why it is remarkable to have won the national handwriting competition.

"She has this independent streak where she just knows that she can do it and she'll figure out her own way. She is beautiful and strong and mighty just the way she is, and she just lives that way," her mother Cathryn said.

While her teacher Cheryl Churilla said, "I have never heard this little girl say, 'I can't'. She's a little rock star. She tackles absolutely everything you can throw at her, and she gives it her best." The 10-year-old came to the US from China in July 2015 to join her new family. Her mother said she could speak and write in Mandarin but picked up English quickly with the help of her sister, Veronica. Hinesley will receive her national award trophy and $500 prize at an awards ceremony on June 13.