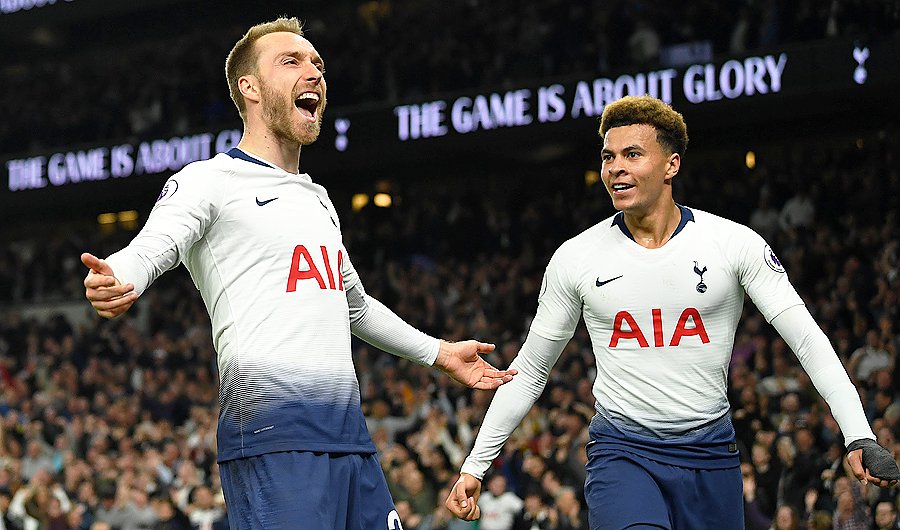 Mauricio Pochettino admitted his tired Tottenham stars are pushing themselves to their limits after Christian Eriksen's superb late strike sealed a hard-fought 1-0 win over struggling Brighton on Tuesday.

Pochettino's third-placed side dominated from start to finish at the Tottenham Hotspur Stadium, but a combination of brave Brighton defending and poor finishing kept the match in the balance until the 88th minute.

"The team are not as fresh as we wanted, not just legs, but minds, so we have to congratulate the players. I'm so proud of them," said Pochettino.

"Brighton were a really brave opponent. The most important thing is we believed, we didn't give up."

Although Arsenal can close the gap to one point if they win at Wolves on Wednesday, this was a vital result in Spurs' bid to qualify for next season's Champions League via a top four finish.

Tottenham have now won all four games in all competitions at their plush new arena, scoring eight goals without reply.

This was the most frustrating fixture at the £1 billion ($1.3 billion) ground as the hosts looked hamstrung without injured striker Harry Kane until Eriksen came to the rescue with his ninth goal of the season in all competitions.

But Pochettino was delighted with the way his players kept plugging away right to the end despite the draining effects of their hectic fixture list.

"There were more than 20 attempts and the reward is massive," he said.

"It is three very important points and to be in a good position in the table."

Tottenham can take another step towards securing their top-four berth in Saturday's crucial London derby against West Ham before focusing on the first leg of the Champions League semi-finals against Ajax next week.

"We must be confident, the team are doing a fantastic effort after tough games against Manchester City," Pochettino added.

The finale was painful for Brighton, who have won only two of their last 15 league games and sit just one place and three points above the relegation zone.

They have failed to score in their past seven games in all competitions and are in severe danger of being caught by third bottom Cardiff in the fight to avoid relegation.

Defeats for Arsenal and Manchester United, combined with Chelsea's draw against Burnley, had given Tottenham a welcome lift following their 1-0 loss at Manchester City on Saturday.

With Brighton defending deep, Lucas Moura nearly teed up Dele Alli with a low cross, but Lewis Dunk slid in to clear off the line at the last second.

Pochettino's decision to pick Fernando Llorente as his main striker forced Son Heung-min out to the flanks when the South Korean had been so deadly in a more central role in recent weeks.

The move left Tottenham a little short of pace and penetration as they laboured to break down Brighton.

Spurs were denied by more last-ditch Brighton defending when Alli deftly controlled a high ball in the six yard box and flicked goalwards, only to see Shane Duffy scramble it off the line.

Duffy threatened at the other end when his header forced Tottenham keeper Hugo Lloris into action for the first time early in the second half.

Danny Rose's fierce 20-yarder was well saved by Mat Ryan, while Toby Alderweireld's luck was out as well when the Tottenham defender's low drive hit a post, rolling along the line and away to safety.

Desperate for a breakthrough, Pochettino sent on much-maligned striker Vincent Janssen for his first appearance in 20 months.

Janssen didn't make much of an impression, but Tottenham kept pressing and, with their 29th shot, Eriksen finally landed the knockout blow in the 88th minute.

Setting his sights from 25 yards, the Denmark midfielder lashed a powerful strike with his left foot that beat Ryan at his near post and sparked wild celebrations.