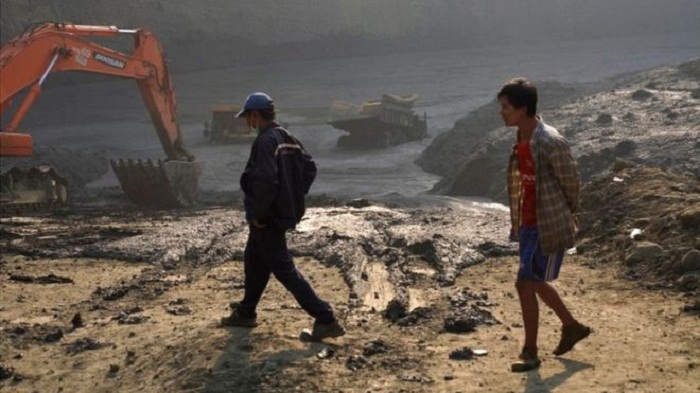 Police said the landslide in Kachin state was so great it created a "mud lake" that engulfed the workers' living quarters along with some 40 vehicles.

Landslides caused by jade mining, an industry with few regulations, kill dozens in Myanmar every year.

A local official said it was "very difficult to retrieve the bodies" and only three had been recovered.

"They won't survive," Tin Soe, a local lawmaker, said. "It's not possible because they are buried under mud."

The ministry of information identified the companies involved in the accident as Shwe Nagar Koe Kaung and Myanmar Thura Gems.

Neither has yet commented, although the director of Myanmar Thura Gems, Hla Soe Oo, told AFP news agency he was on his way to the site.

The search and rescue effort is ongoing, officials said.

The jade industry in the northern state of Kachin, which borders India and China, was estimated to be worth about $31bn (£24bn) in 2014.

Victims of landslides and other accidents are often members of poor ethnic communities searching for remaining gems left behind by the big firms.

As well as jade, Myanmar has a wealth of natural resources including timber, gold and amber, all of which help finance both sides of a civil war between ethnic Kachin rebels and the military.