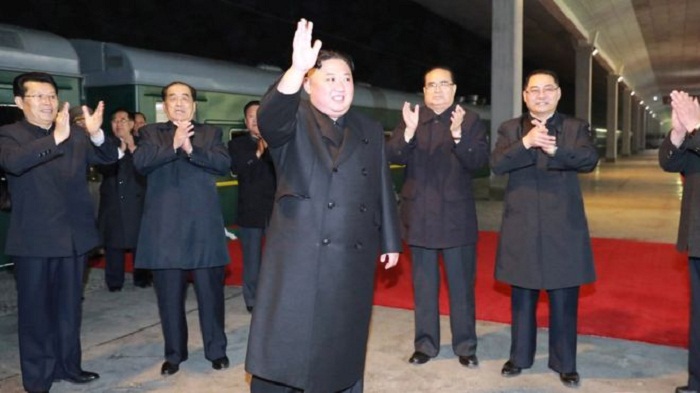 State media say Mr Kim is travelling on his private train. It will be his first talks with the Russian president.

The Kremlin says they will meet near the Pacific coast city of Vladivostok on Thursday, and will talk about the Korean peninsula's "nuclear problem".

Mr Trump and Mr Kim met in Hanoi earlier this year to discuss North Korea's nuclear weapons programme, but the summit - their second - ended without agreement.

"Russia intends to help in any way possible to cement that positive trend," he told reporters on Tuesday.

North Korean state media has yet to confirm a time or location for the summit.

But Russian and North Korean national flags are already in place on Vladivostok's Russky island, where the meeting is expected to take place.

Russia has previously been involved in talks to end North Korea's nuclear programme.

A South Korean foreign ministry spokesman said Russia "shares our viewpoints" on denuclearisation and peace on the peninsula.

Earlier this month North Korea demanded that US Secretary of State Mike Pompeo be removed from nuclear talks, accusing him of "talking nonsense" and asking for someone "more careful" to replace him.

The country has blamed Mr Pompeo for the collapse of the Hanoi summit in February.

Nuclear activity seems to be continuing in North Korea, and the country said it had tested a new "tactical guided weapon" - thought to be a short-range missile - earlier in April.