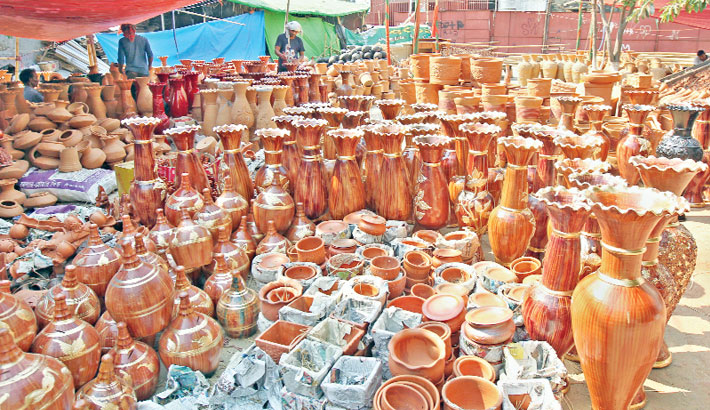 Earthen pots which are put on display will be taken to ‘Jabbarer Boli Khela O Baishakhi Mela,’ beginning in the port city today. The Photo was taken from Laldighi Maidan on Tuesday. — sun photo

The historic ‘Jabbarer Boli Khela O Baishakhi Mela' begins today in the port city amid much enthusiasm and festivity to remind people of rich culture and heritage of Chattogram.

Like previous years, organisers of the 110th version of the three-day Baishakhi fair and Boli Khela (wrestling competition) have taken sufficient measures to make the traditional event successful.

Though the fair is scheduled to be begun today, hundreds of sellers from different parts of the country started arriving at the fair ground over the last few days and will stay with their products after two days of the scheduled date of ending the fair on Friday.

Visiting the fair venue on Tuesday, this correspondent found that a good number of sellers have already set up their makeshift shops in and around the venue.

Besides, many others were seen coming with different products.

Sources said the sellers from outside the Chattogram arrived two or three days ahead of the fair to get shops at better position.

The sellers will sit with their products on some two square-kilometre areas stretching from Nandan Kanan to Kotwali Intersection and Anderkilla to Jail Road and KC Dey Road.

The shopkeepers will display huge varieties of products including potteries, furniture, fruits, sweetmeats, handicrafts, handloom products, textile garments, household materials, showpieces and toys which are not commonly available in the city.

However, scorching heat was not allowing many of the sellers to keep the shops open until the sun sets.

Reaz Uddin, 52, who came from the capital’s Jatrabari area with his merry-go-round, said he has been attending the fair for over 30 years.

“I also came this year with my machineries and five labours with a hope of doing good business like previous occasions,” he said.

Reaz said they kept necessary instruments of the merry-go-round ready to set up on the fair ground.

Alongside preparation for the fair, the organisers were also passing busy time in setting up stage and other works for the wresting competition, the main attraction of the fair.

He informed that registration of aspirant wresters will start from Wednesday.

“Over 200 wresters from different parts of the country will register their names for the competition to be held on Thursday this year,” said Anwar, also a grandson of Abdul Jabbar Sawdagor who introduced the competition.

However, a sub-committee of the organisers will select the persons who will finally take part in the contest, he said.

The champion of the competition will be awarded prize money of Tk 20,000 while the runner up Tk 15,000 with trophies, said Anwar.

Besides, each of the general competitors will be given Tk 1,000 and a crest, the general secretary said.

Along with the wresting, a session for folk songs like Jari, Sari, Bhatiari and others will be held at the fair to put up the rich culture and heritage of the country this year, he said.

Regarding the recognition of the fair as world cultural heritage by UNESCO, he said a process was going on through concerned ministry to avail it.

The general secretary said they have already sent a letter to the concerned authority inviting them to visit the event.

Mentionable, prominent local merchant Abdul Jabbar Sawdagar of the city's Badorpati area introduced the wrestling as a traditional event in 1909 (Bangla 1316). The aim was to organise and inspire the youths for anti-British movement.

It is said that the history of this event dates back to the Muslim and Arakani rules when aristocratic families, particularly the landlords, used to employ healthy and strong wrestlers to counter their rivals.

There were 22 families of wrestlers hailing from 20 villages on the alluvial plain between the river Karnaphuli and Shankha in South Chattogram.

Some two lakh people of Chattogram were expatriates in the then Burma long before the partition of this sub-continent. The expatriates used to return home with their huge savings to organise wrestling competition in the month of Chaitra or Baishakh every year.